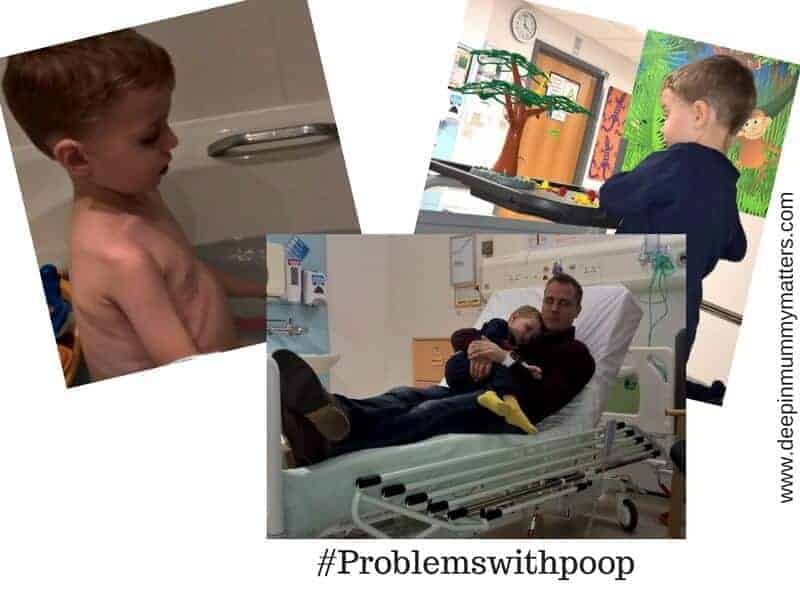 So pleased to have my boy back! #problemswithpoop

These past few weeks have been more stressful than I can begin to explain. I always look forward to the beginning of December, getting the decorations up and doing Christmas activities with the Beans after school. Unfortunately things haven’t gone quite to plan this year, as December began I was home alone with the Beans one evening after school. Hubby was out for the evening so I bathed the Beans and got them into their PJ’s ready for tea. Just as I was getting tea out of the oven my Mum popped in on her way home from work and the Beans were playing together in the hallway. Seconds later we heard an almighty bang followed by a piercing scream from Jelly Bean. I ran through to see what had happened and found him lying on the floor next to the radiator. He had been having a donkey ride on Little Bean’s back when he had lost his balance, fallen off and cracked the back of his head on the radiator. I picked him up and ran him to the kitchen to grab the ice pack and felt wet on my hands. As I pulled my hand away I saw that it was covered in blood, he had split his head open and there was a lot of blood running down his back onto his PJs.

We spent the evening at hospital waiting to be seen where Daddy met up with us. He had to have his head glued but thankfully there appeared to be no further damage done. We were sent home and told of any dangers signs to look out for following a head injury but on the whole they were happy with how bright and chatty he was.

I kept Jelly Bean at home with me the next day so that he could rest after his bang to the head and very late night. Understandably he was very tired and had a bit of a headache. He slept for nearly 4 hours in the afternoon and when he woke up he was sick . . . loads! He was then sick another 4 times within the hour and had no energy whatsoever. I rang the Doctor who told me that I needed to take him straight back to A&E. Little Bean has a phobia of people being sick so she freaked out when we collected her from school and he was being sick. I had to leave her with a friend whilst I took Beanie Boy with me to hospital to get Jelly Bean seen by a Doctor.

The Doctors were very worried about Jelly Bean when I arrived at hospital as he had continued to be sick in the car and outside the hospital. We decided that the hospital wasn’t the best place for Beanie Boy to be so he took him home and picked up Little Bean from our friends so that they could all have tea and go to bed.

Meanwhile the Doctors were talking to me about head scans and drips, it all seemed to a bit of a blur. They put him onto a fluid challenge where I had to give him 10ml of dioralyte every 10 minutes and record whether he kept it down or not. He had only urinated once throughout the day and hadn’t eaten or drunk so they were worried he would become dehydrated. The first 30ml of fluid I gave him came back up again. In total he was sick (in large volumes) 17 times in 6 hours. He fell asleep around 8pm and was woken by the Doctor 20 minutes later, we tried again with the fluid challenge and thankfully with the odd dribble every couple of minutes he finally started to keep the fluids down. When he had kept down 40ml and was able to have a conversation with the Doctor he was finally discharged. They decided that it was a coincidental tummy bug and not a result of his bang to the head. I can’t begin to tell you how relieved we were. He stayed at home with me for the remainder of the week to recover from his traumatic few days and he slept often since he was so tired.

On the Monday he returned to school but I was then joined at home by Beanie Boy who had now caught a tummy bug too. We managed to pop out to take Little Bean and Jelly Bean to school. When we returned home I settled him down in the playroom with a drink and snack in front of a DVD whilst I returned to the kitchen to have my breakfast. Five minutes later he came running through shouting “Mummy, Mummy” and I figured it was because of his tummy but no, he continued with “Mummy, I’ve got some Playmobil stuck up my nose”. I tilted his head back and sure enough, there right up in the top of his nose was a yellow Playmobil connector brick. We tried getting him to blow it out, we tried making him sneeze but still it wouldn’t budge. Finally I tried to get it with tweezers but it was stuck quite firm and Beanie Boy was beginning to panic. 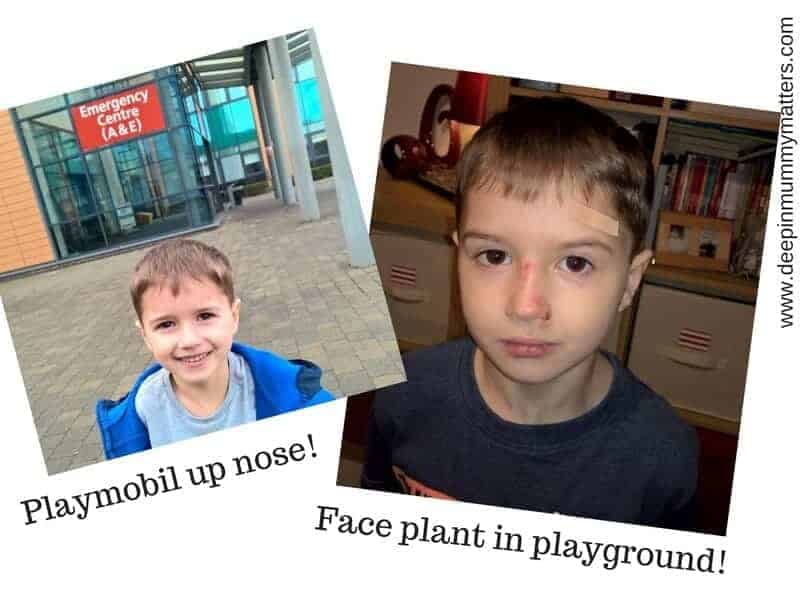 A few years ago I had a similar incident with Jelly Bean and a mini Lego brick so I knew that they wouldn’t remove it at the GP Surgery and instead took him straight to A&E. We ended up having to wait at hospital for nearly 3 hours and returned home just in time to collect the others from school. The day that I finally managed to get Beanie Boy back to school I collected him to find his face covered in scrapes down one side. He had jumped over a bench and face-planted onto the concrete!! Honestly, he can fall over his own shadow I swear it!!

As the week went on, Jelly Bean began to go downhill again. Unfortunately the couple of days when he was sick meant that he was unable to keep down any of his constipation medicine so the result was that his #problemswithpoop had begun backing up again. He stopped eating and drinking, refused to poop and was generally miserable and obviously very uncomfortable.

Again I kept him at home in the hope that with lots of tummy massages he might finally go to the toilet. I tried giving him suppositories which he naturally hates and this only resulted in a very upset Jelly Bean and a distraught Mummy because he was so frightened and angry. I felt that I was doing something very wrong to him and was sick as a result. Those few days were hell, it’s so hard to see your little one is such pain over something which you assume should happen so naturally.

On Friday I wanted to take him to hospital to see his Consultant for an enema but I didn’t have anyone to help me with the collecting the other children from school and taking care of them as it generally writes off the whole day when he needs to go in. By the time I was able to get to hospital it had been over two weeks since he had opened his bowels. The hospital gave him an X-ray and said that he was full of poop and also had a lot of trapped wind which was causing him lots of pain so they agreed to give him an enema. It took four of us to hold him down whilst he was given the enema and he naturally was very traumatized by it all but thankfully he did eventually open his bowels and let it all go.

We are now nearly two weeks on from the trauma but it took nearly a week before he returned to his happy, chatty, cheeky little self. For the first few days home from hospital he wasn’t much better because he still had a lot to empty out but over those days he let the rest go and slowly his personality came back. 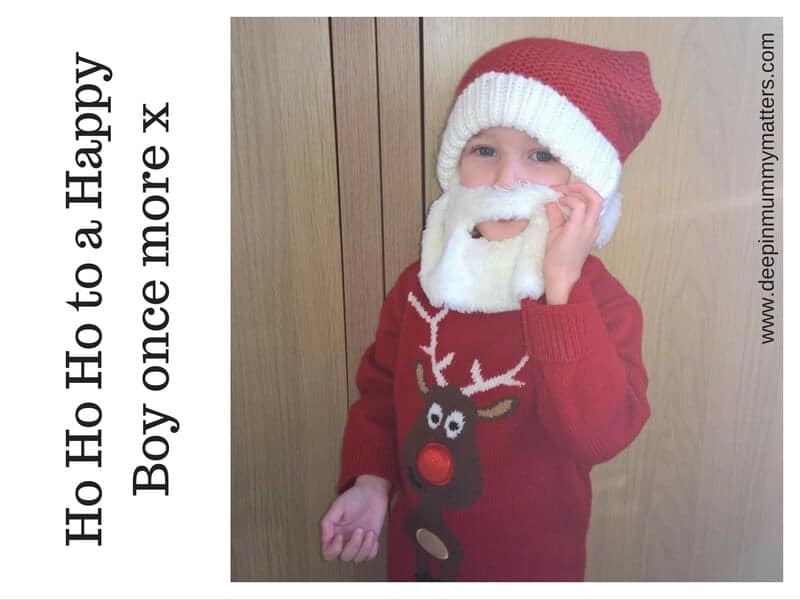 I’m delighted to say that at the moment he seems to have got into the habit of opening his bowels every morning after breakfast so I’m hoping this will continue for him and become the norm so that we can eventually escape these #problemswithpoop. We only have until September to get him sorted before he starts school and at the moment I don’t see it happening. For now I’m just happy that (fingers crossed) all the bugs seem to have left the home and the Beans are all happy and excited for Christmas. I’m looking forward to spending time with my beautiful family and relaxing together, just the way Christmas should be.