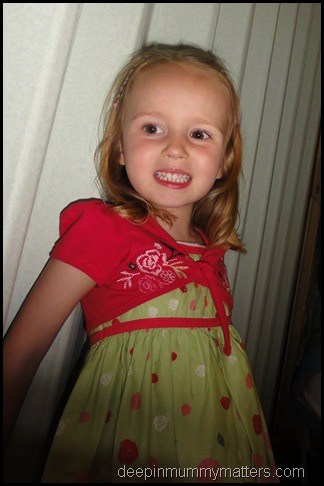 Last night I took one proud little sister in the form of Little Bean to watch Curly in his school production Dazzle Bay. His year was playing the supporting roles and chorus so he didn’t actually have any main parts but he LOVES to perform and you could see that he was itching to be up there in the limelight.

So far throughout his schooling, he has always played main parts in each school production. I had asked Little Bean if she would like to come with me to watch him and she was so excited when she realised that it would be just the two of us “what just us girls, no boys?!”.

We don’t get the opportunity to do very much on our own anymore and she never complains about it but I know that she misses our special time.

When we arrived at school we decided to sit at the back so that I could stand up and lift her to see “Bro” without worrying that we would be in anybody’s way. She sat very patiently waiting for him to come out and then the second that she saw him began shouting “Bro, Bro I’m over here”.

Thankfully he soon spotted her and waved back, she then turned to the lady next to her and said very proudly “that’s my Bro over there”. She never calls him by his name, he is always “Bro” to her and it makes me giggle as now Beanie Boy is following suit calling him “Bro” too, I think it’s very cute.

The production was brilliant and there were some amazing singers, I think the story was a little too complicated for Little Bean to properly follow but she did enjoy dancing along to the music and waving at her big brother every opportunity she got.

By the end of the production it was getting quite late for Little Bean and she was visibly very tired, I said that we could only say goodbye to Bro very quickly (because it was his night at his Mum’s house) and Little Bean became very upset because she thought she wasn’t going to get to say goodbye “but I want to tell Bro he was brilliant” she said through her tears as she saw her beloved Bro disappear behind the curtains off the stage.

Finally, I managed to calm her down and to her great delight, her Curly appeared at her side to say goodnight. She excitedly told him “Bro you were brilliant, night night” and gave him a great big hug and kiss, then beamed from ear to ear “he came to say, goodbye Mummy”. I think it’s fair to say that she was one very proud little sister!