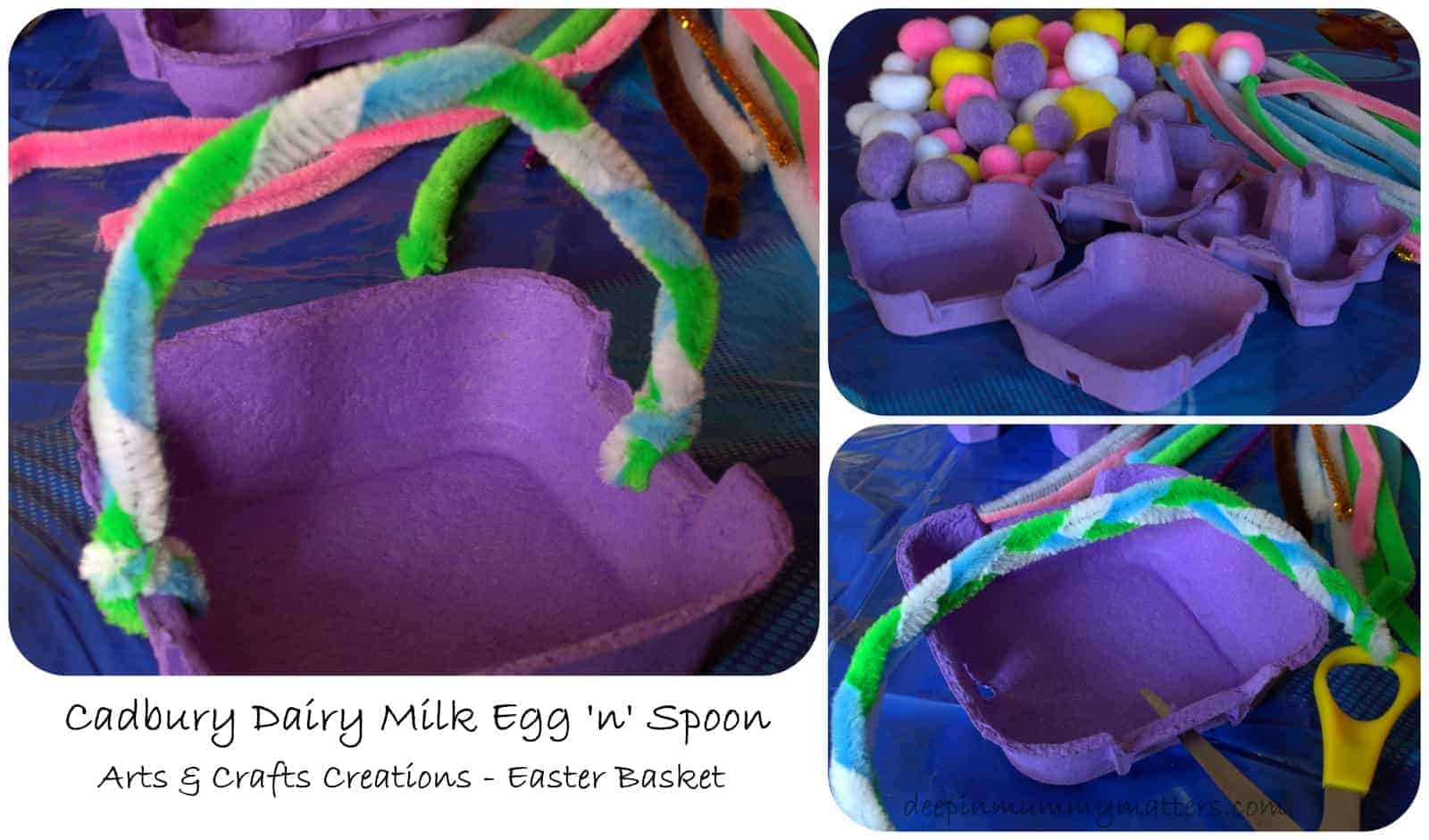 Crafting and Chocolate – could I have been given a more perfect challenge!! In case you have been hiding under a rock you won’t have failed to notice that Easter is just around the corner so we have been getting busy with Easter crafts and for this project, I was put in the catastrophic position of having to eat the chocolate eggs first – you know it’s a tough job this blogging lark but a Mummy’s gotta do what a Mummy’s gotta do! 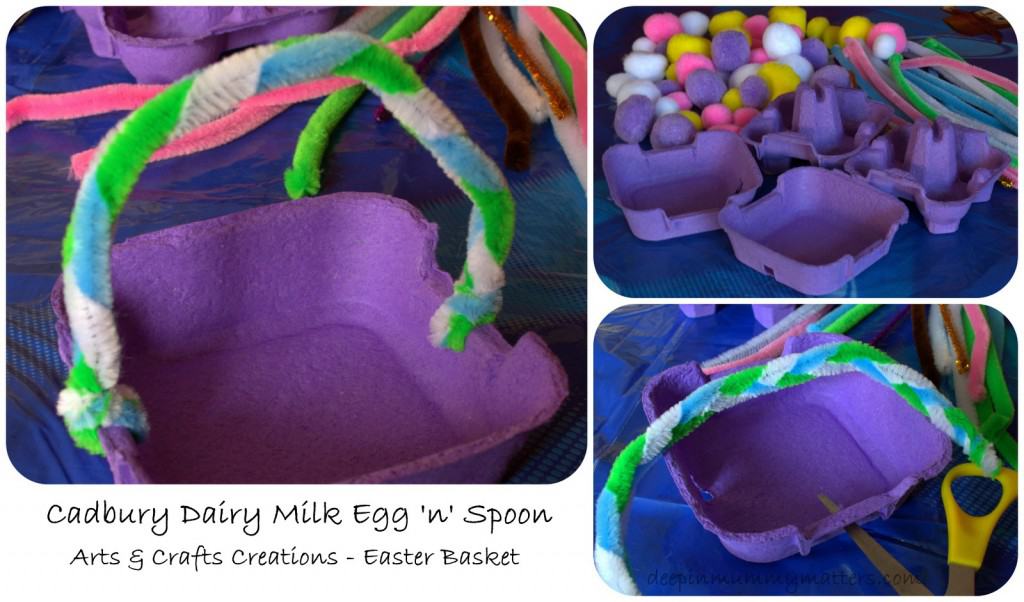 For those of you who are new to Cadbury Dairy Milk Egg ‘n’ Spoon, they are yummy Chocolate Eggs which come in a purple egg box (pack of 4) with 2 spoons. Just like eating a boiled egg, you take the top off and then scoop out the milky mousse centre (or as my Husband eats them; just stick it in your mouth whole and enjoy!). So what do you do with the box when you have finished with it? Use it for crafts of course. I was given a craft sheet to follow but when I asked the Beans what they wanted to make with the boxes they said ‘Easter Baskets’ so that’s exactly what we made. 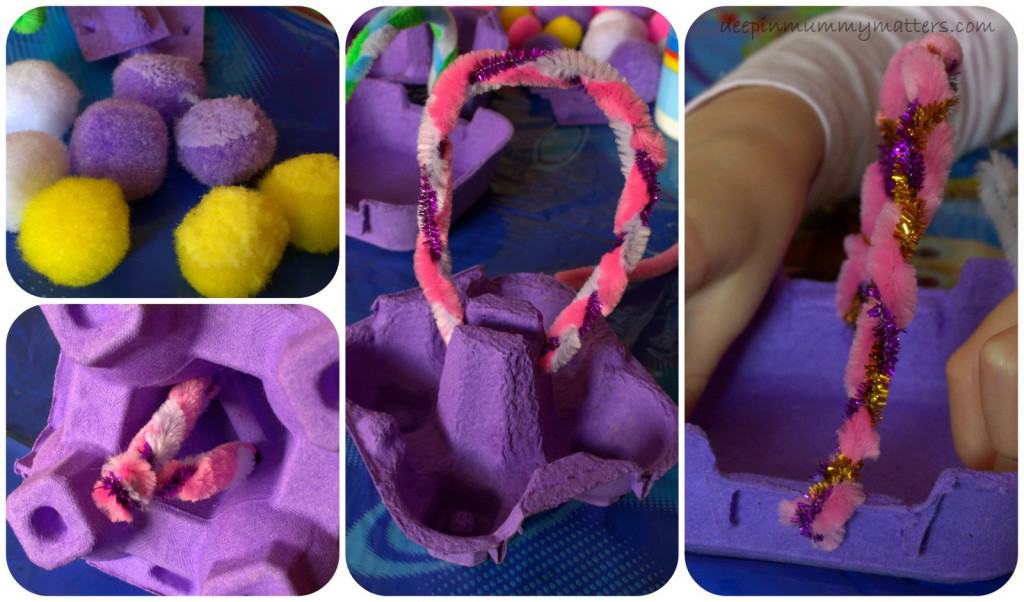 We began by cutting the inner flap off the boxes and then cutting along the hinge to separate the tops from the bottoms. I had also been sent Benny Bunny’s Bumper Craft Kit from Asda so we used the Pom Poms and Pipe Cleaners to decorate our Easter Baskets. We began by twisting the Pipe Cleaners together to make a handle for the basket and then I put a hole in either side of the box with a pair of scissors to thread the handle through, twisting the end back up and around to secure it. (On one of the bottom halves I made the holes in either side of the centre post and securted them underneath). Then it was time for decorating so I handed over to the Beans once more. 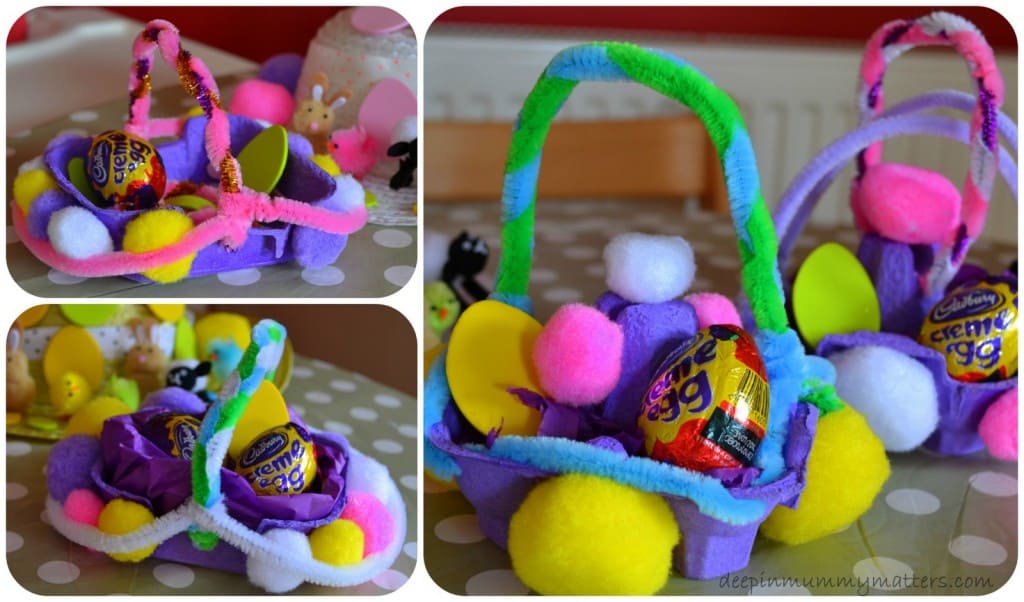 Unfortunately we found the Pom Poms rather a challenge to stick on using PVA glue and tried various different ways; putting glue on the Pom Poms and leaving the glue to dry then putting more glue on the Pom Poms before squashing them onto the boxes (this was hit and miss), we tried painting the whole of the outside of the box with PVA glue first to seal the cardboard and then trying the same trick with the Pom Poms, this seemed to work a little better but then we decided to use the Pipe Cleaners to add decoration AND to hold the Pom Poms in place. Finally I discovered I still had a box of Glue Dots kicking around which worked much better. I do have it on good authority that using a Glue Gun is very successful although obviously if children are crafting they need to be supervised well. We then popped some purple tissue paper into the baskets so that our yummy Cadbury’s Creme Eggs didn’t roll around too much and get damaged. Speaking of which, if you are a fan of Cadbury’s Creme Eggs then get your hands on them before they are taken off the shelves on 20th April!!!! I may have to stock up (just don’t tell Hubby where I am going to hide them). 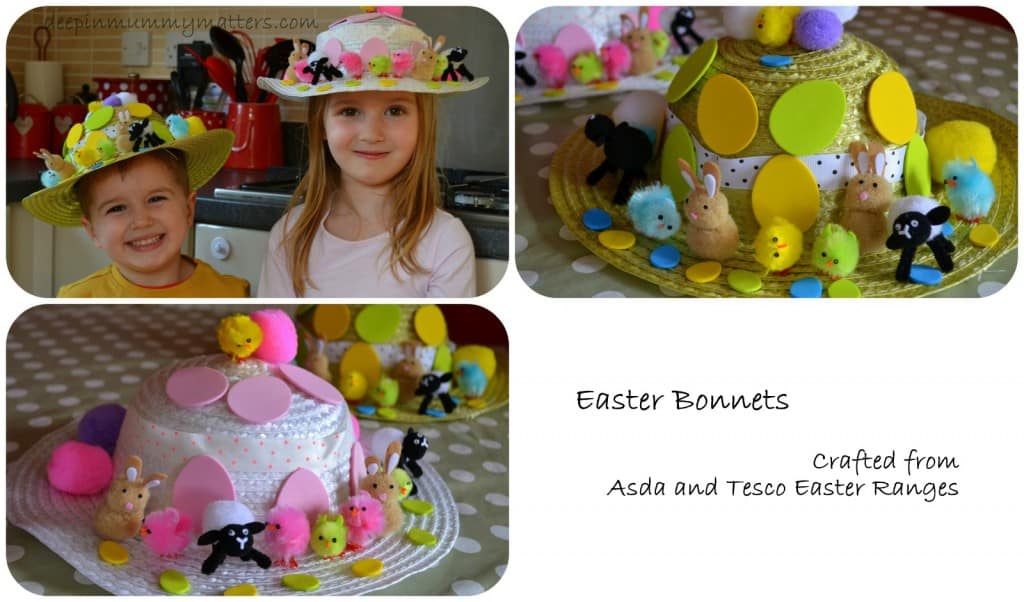 Next we used some more of the materials from the Asda Craft Box along with the Bunnies, Chicks and Sheep to decorate the Easter Bonnets I bought for about £1 from Tesco (the boxes of Chicks etc from Tesco were £1 a box). This time we used Glue Dots to secure everything onto the Bonnets and I think you’ll have to agree, they do look very cute! 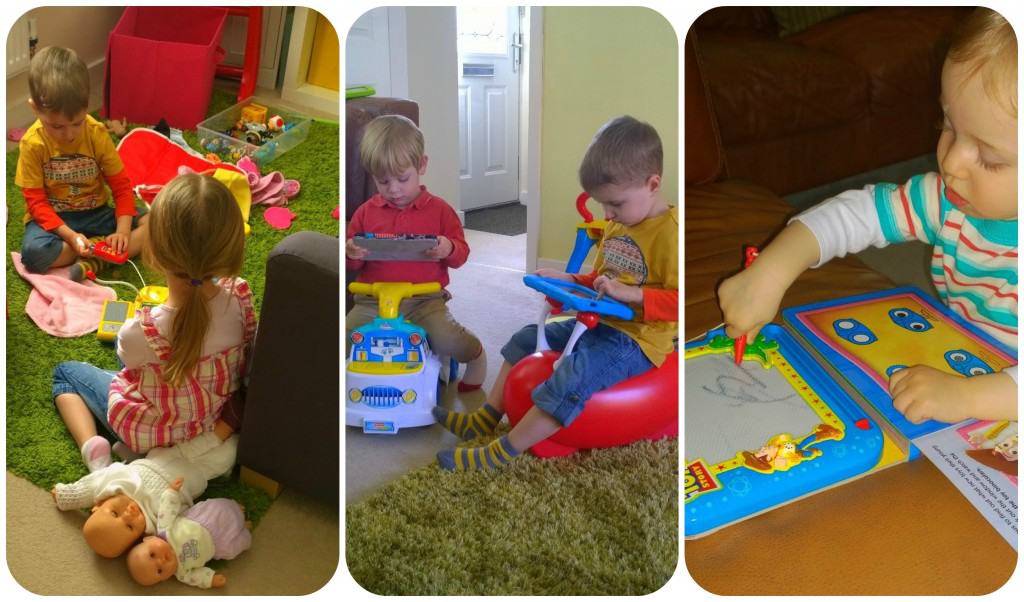 Looking at these pictures you’d be forgiven for thinking that today was all rosy and happy but actually, it wasn’t that great. Because of the issues with the Pom Poms not sticking, the Beans quickly got bored of making their baskets and they abandoned me to put the baskets back together when they fell apart and from there it was a bit of a rollercoaster as they played happily one minute and then fought like gladiators the next. As I walked into the playroom to praise them for playing so nicely together a fight erupted and I cursed myself for daring to praise them. Our salvation came in the form of our friends Karin, Ella and Sam who brought welcome distraction; the girls disappeared to Little Bean’s bedroom and the boys flitted from room to room downstairs, eventually settling on playing on the Kindles next to each other whilst Jelly Bean generally tried to cause mischief.

What did you do today?

DISCLAIMER: I was sent two boxes of Egg ‘n’ Spoon, Cadbury’s Creme Eggs and the Asda Crafting Kit for the purpose of this post. All words, images and opinions are my own and may not be copied without my permission. I have not been instructed what to write.