Do you remember that feeling in the early months of being a parent of a newborn? You have been woken countless times throughout the night and then you wake in the morning feeling like your head is full of cotton wool, your eyelids have cast-iron weights pulling them down and you can’t understand why you keep putting the kettle in the fridge, finding the milk on the kettle stand and what is your phone doing in the oven? I have been there soooo many times let me tell you!

I actually found it easier with Little Bean because once Daddy had gone to work and she fell back to sleep I could do what the experts said and catch up on sleep myself. When Beanie Boy came home that first night was like a form of torture, he woke up every hour and would feed for half an hour, so I would get half an hour’s sleep between feeds. In the morning rather than being able to crawl back into bed whilst Beanie Boy slept, I found myself with an excitable 2-year-old Little Bean wanting to play with her new baby brother and for Mummy to do all the things that we would normally do like swimming, toddler groups, long walks and playtime in the park.

It was definitely harder the second time around and I’m fully prepared for the fact that it will probably be even harder when Jelly Bean arrives since this time I will have to get a 4 year old to school on time AND still entertain a 2-year-old whilst caring for a newborn. Would I change it? NO WAY!! This is what being a parent is all about, but that doesn’t mean it’s easy.

Johnson’s Baby and sleep expert Dr Dev Banerjee has given this feeling a name, Baby Lag. Personally I don’t think they could have found a more appropriate name. They coined the new term Baby Lag because the feelings are synonymous with the feeling of complete exhaustion experienced by people travelling multiple transatlantic flights. As part of their new Baby Lag Campaign, Johnson’s Baby has come up with a unique 3-step clinically proven routine to get your babies sleeping better in just one week. Why not try it out for 7 nights and see what a difference it makes to you and your baby. 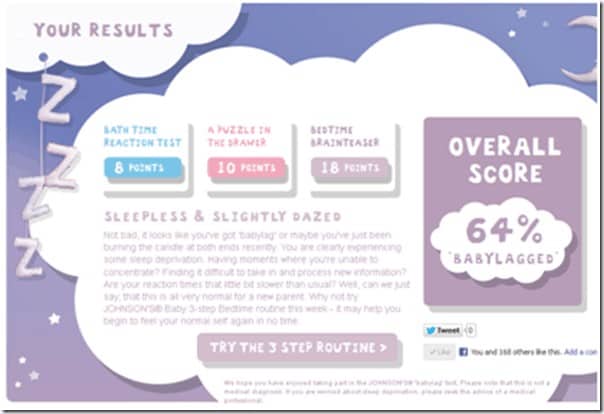 Just for fun Johnson’s have come up with a short online test to see how Baby Lagged you are which is made up of three tests assessing those areas commonly affected by sleep deprivation – memory (recall), reaction time and problem-solving. I took the test as I’m feeling pretty Baby Lagged already thanks to my bump wriggling the whole night through (doesn’t bode well for when he has been evicted does it?!), my coughing fits thanks to whooping cough and my tiddlers waking me up both in the night and early in the mornings since Daddy was taken into hospital. Needless to say, exhaustion is setting in and my brain is moving out!!

My reaction times were SHOCKING, to say the least, I don’t think I managed to hit one duck, my recall was poor but my problem solving wasn’t too bad. My score came out at 64% baby lagged so I will definitely be taking the test again once Jelly Bean arrives to see how it compares.

There was one thing which people would often say to me in those early months “it won’t last forever”. Of course, at the time when I was feeling tired, emotional and my nerves were a little on edge I used to think “what a daft thing to say” but it’s true, there is light at the end of the tunnel and your baby days are over in the blink of an eye.  Babies sleep patterns naturally change over time.  So as difficult as those days can me, make the most of them whilst you can. Even in the middle of the night when baby won’t sleep I’ll bet they will still manage to raise a smile from you at least once! 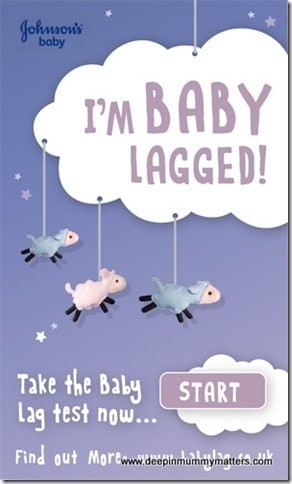