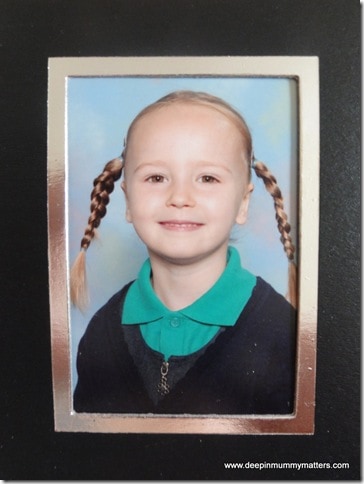 We should have named her Gretel

Last week Little Bean came home with her first official School Photo and I have to admit, I did give a little giggle when I saw it and then I slapped myself repeatedly about the head with an imaginary wet fish! Look at my poor Little Bean, she is smiling so beautifully and is such a little sweetheart, how on earth could I have done that with her hair?! All that is missing is a couple of wires to flick it up and an Austrian jumpsuit from the mountains of Tirol!! Seriously, I need lessons in how to dress her hair because I am rubbish at it. Unfortunately Little Bean has inherited my hair which isn’t straight and it isn’t curly, it’s just scruffy with a double crown. If I don’t tie her hair up every day she looks like she has been dragged through a hedge backwards but try as I might I am useless with hair ideas and I can’t for the life of me fathom out how to do a French plait???? With my own hair I either have to scrape it back into a ponytail/bun or straighten it which then ruins it. I have asked if she wants her hair shorter but just like I did when I was little, she wants to be girly and have long hair like all the other little girls in her class.

Honestly, I swear Beanie Boy takes one look at Little Bean in a morning and breathes a sigh of relief that he wasn’t a girl, he gets to go to the Barber’s Shop with Daddy for a father/son cut and lives happily in the knowledge that I will never be let loose on his barnet!

Come on parent’s of little girls, share with me your wisdom, how can I save Little Bean from a lifetime of hair misery with me for her hairdresser?