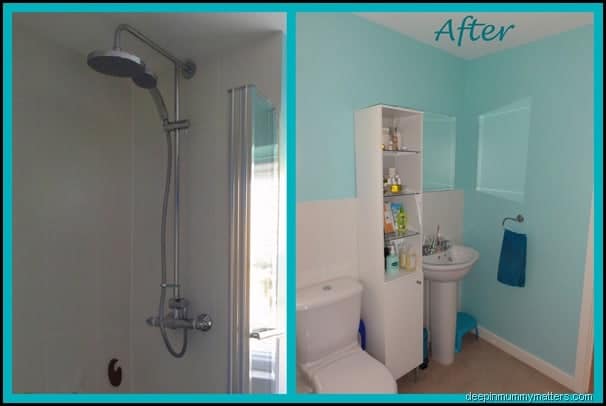 May 27 By: Sabina Green 2 Comments

When we were in the design stages of our new house nearly 3 years ago we in our infinite wisdom decided that we would be fine with just a bath in the master bathroom for the children and a shower in the en-suite for us. We didn’t really think about what would happen when guests came to stay and what a pain it would be to all use the one shower (though obviously not at the same time!) and so when we were offered the opportunity to review a new Mira Shower as part of a bathroom makeover we jumped at the chance.

Our family bathroom has always been the room in the house that has never really found it’s identity. It is the darkest room in the house because it doesn’t get a lot of natural daylight due to its positioning and so we wanted to brighten it up and make it look a bit more vibrant yet still keep the aqua look that we originally wanted.

We were allowed to choose our own shower and we opted for the Mira Coda Pro with Diverter Shower which has two heads rather than one. A drencher head for a spa-like shower and a standard shower head that can be taken down and used over the bath. There were loads of gorgeous showers to choose from on their site and a really clever tool which helps you to select the right shower for you. I LOVE a good shower and have always wanted a drencher shower head. This shower can be used with either the drencher or standard head alone or both together. It has variable temperature controls which are really easy to use, even the children can operate them safely. The shower itself looks simple and stylish, exactly what we were looking for.

We toyed with a shower curtain or a bath screen. With a shower curtain there was the option to change the curtain to match our moods or to give the bathroom an instant face-lift, but with young children we decided that this would probably end up as a play thing for them to hang on, hide behind and generally be a pain with. We decided that a bath screen would best suit our needs and we chose a tri-fold screen because it looked modern and could be folded back out of the way for the majority of the time and then just opened out when someone wants to use the shower.

We hired a plumber to come and fit the shower and screen which took less than 3 hours to do both and the results were fantastic. We were instructed not to use the shower for 24 hours to give all the sealant around the shower and screen a chance to dry but that didn’t stop us getting on with the decorating. Hubby said to work and had it all done and dusted in a day and we were really pleased with the results. Our once dull and boring bathroom now looks vibrant and welcoming. 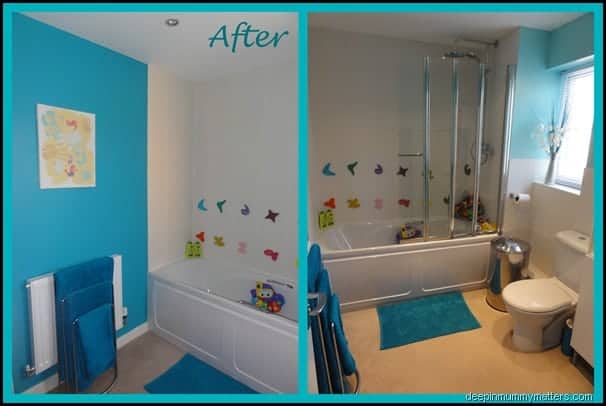 Having the new shower in the master bathroom has made the world of difference, even Little Bean and Beanie Boy are now starting to have showers more too. They never liked the shower cubicle in the en-suite I think they felt trapped. Hubby and I now have our en-suite back and guests have their own space instead of feeling like they are invading ours. The shower is absolutely perfect and everyone has commented on how they could “stay in the shower all day” so I think that is pretty positive feedback. Of course, the only problem now is, I feel jealous of the guests because they get the better shower!!

DISCLAIMER: We were given a Mira Coda Pro with Diverter Shower for the purpose of this post. All words, photographs and opinions are my own and may not be copied without my permission.