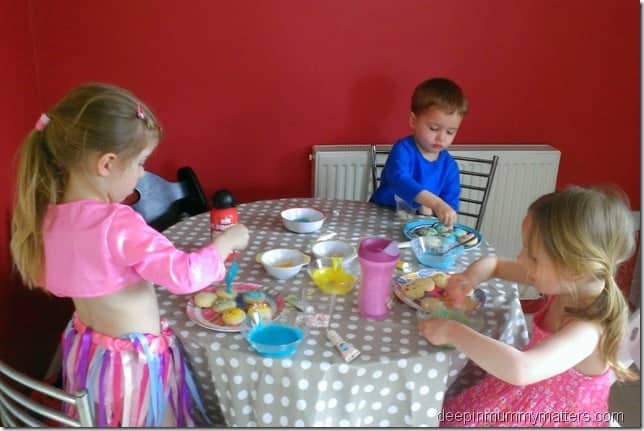 Little Bean had her first school friend to tea

I feel quite ashamed to say that as we are heading towards the end of Little Bean’s first year at Primary School I have only just got around to inviting a friend home for a play date and tea but my excuse is that I was pregnant and not really up to running around after any more children than I needed to. That and the fact that Little Bean’s friendship circle changed on a daily basis.

Just recently I have been hearing one little girl’s name being mentioned more and more when Little Bean talks about school. Last week Little Bean had worked particularly hard at earning her marbles, she was completely spurred on by the fact that she was earning her marbles faster than Beanie Boy who, up until now, had been in the lead each week since we began using the marbles. When Little Bean had earned all of her marbles I asked her what she would like for her treat and she said that she would like to invite KJ home for tea so I spoke to her Mummy and made the necessary arrangements.

On Monday KJ came home with us and I had to laugh when her Mummy said to me “she doesn’t really eat”, it would appear that Little Bean had found a friend very similar to herself in that regard. The girls excitedly walked back to the car and Little Bean turned into a bit of a show-off with her behaviour, I realised this was because she was very excited so I let some of it slip until she started being a bit lippy with me. When we arrived home the girls ran up to Little Bean’s bedroom and were soon putting on a fashion show for me as they worked their way through her dressing up box. They played really well together.

I had bought the children some biscuits to decorate and prepared some bowls of coloured icing and sprinkles then the children set to work on decorating their biscuits. This activity seemed to go down very well, as did the promise of pancakes for tea. Unfortunately Beanie Boy turned into a monster and frightened poor KJ by trying to bite her leg. She was so frightened that she wouldn’t go in any room where he was unless I was there with them.

As tea time approached I told myself not to expect too much from any of them, it was an exciting time for them and they probably wouldn’t want to eat but was pleasantly surprised when they all cleared their plates and Little Bean even asked for seconds!

After tea it all went down hill as Little Bean decided she didn’t want to play any longer, she wanted to sit and watch TV but KJ still wanted to play. I turned the TV off so that Little Bean would play but she wouldn’t share the toys and became quite difficult. This was the time that I often call the “witching hour” so I guess I should be happy that it hadn’t surfaced earlier.

I felt surprisingly relaxed at the end of the play date where I had expected to be pulling my hair out, let’s see how things go the next time Little Bean wants to invite a friend over.

How often do your children have play dates after school and do you organise activities or just leave them to their own devices?

NOTE: I asked permission of KJ’s Mummy before posting this photo.