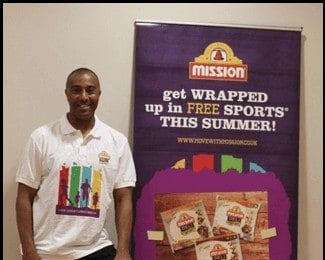 An Interview with Colin Jackson

I’m really loving some of the new opportunities sent my way as part of my blogging. You may have already seen my interview with Bear Grylls, if not you can see it here. This time I was asked if I would like to interview Colin Jackson and I couldn’t say yes fast enough, well with a man who can run 60m hurdles in 7.30 seconds there’s no time to hang around.

Colin Jackson has been working with Mission Deli Wraps on a campaign called On a Mission to Get Moving. Together they want to inspire the nation’s children and adults to get active. All you have to do is buy two packs of Mission Deli Wraps and enter the code online at www.movewithmission.co.uk to redeem a free sports activity in your local area. Activities such as a free family swimming pass, an LA Gym passes, cheerleading and squash sessions are just some of the choices available to you.

Now, if like me, you tend to be a little unimaginative when it comes to food then don’t despair because if you visit www.missioninyourkitchen.co.uk then you can find lots of different ideas for how to eat your Mission Deli Wrap and liven up lunchtime. Promotional packs are only available until the end of July so don’t hang around, get on your mission now!

My interview with Colin Jackson

Q. Being a former Olympian yourself you will know exactly how this year’s Olympians will be feeling in the run-up to starting of London 2012. Do you think the pressure and expectations will be higher for them because they are on home turf?

A. Absolutely right. Many of them are playing a high profile part of advertising for the Olympics so they feel a sense of responsibility and extreme pressure. The closer we get to the start of the Olympics many of them are feeling that they haven’t done enough training and are finding it hard to balance training with social activities. Even if we gave them another two months they would still feel that they haven’t done enough. There is a lot of anxiety amongst the team as they are preparing for their ultimate performance. They just want to get out there and do it now.

Q. Which events are you most looking forward to watching and commentating on?

A. Colin was only sat talking about this recently with the rest of the BBC team. Colin said it doesn’t matter what they watch or commentate on they just get totally drawn into it and really get the enthusiasm for all sports although of course, his heart lies with Athletics and the 100m sprint. For him, there is only one man to win this race – Usain Bolt. Colin commented that the moment when the runners approach their starting blocks and the stadium falls silent the air is totally electric. As they take their places you hear the breathing of the person next to you as they steady themselves ready to go.

I asked Colin if he felt envious that he was no longer competing – “I’m just pleased I don’t have to take the pressure anymore”.

Q. Were you always interested in sport as a child or did you have a defining moment where you thought “this is what I want to do?”.

A. Colin said he has been interested in sport for as long as he can remember. He won his first championship at 4yrs old doing the 60m dash for an all-school championship where he came 3rd. Track and field just became a by-product of his love for running.

Q. What is your proudest achievement to date?

A. Winning World Junior Champion 1986. He had a really traumatic time getting ready for that championship and yet he learned that he had the ability to focus and deliver through stability and self-belief, he honed in, focussed and did great.

Q. We have three children who all thrive on being outdoors which is great in the summer months but in the winter we struggle for activities and their behaviour takes a turn for the worse. What would you suggest for a 2, 4 and 11-year-old on rainy days?

A. Gymnastics in the house – when Colin’s nephew was 2yrs old he would hold him so that he could do pull-ups on the door frame or doing the wheelbarrow around the lounge. Colin suggests functional activities and stretching. He said if you set them achievable targets they will develop confidence. Kids like beating adults and they often can because they can move their bodies better than we can because they are more flexible. Hold small competitions for them, it’s great for the kid’s self-esteem.

Q. Sponsorships for sportsmen/women appear to be much more high profile these days than perhaps when you were starting out. Do you think this encourages the youth of today that there is more of a possibility for them to make something of themselves if they are good at sport?

A. Absolutely but it’s not a problem, it motivates them which is good. As long as they focus on the job in hand, it encourages them to do well.

Q. We can’t have a chat and not mention Strictly so have you still got your dancing shoes on? Our daughter currently attends tap dancing, although I think she would prefer street dance when she is old enough for the class. Which is your favourite genre of dance and why?

A. Yeah – still in contact with them. He had the most fun doing Strictly and loved dancing with Erin. They would often meet up in Cardiff to practice and just end up in hysterics laughing at each other.

Colin’s favourite genre was Ballroom – though perhaps this was because Erin is a ballroom specialist. He loved the formality of it.

Q. What do you do to relax?

A. Sleep! Colin likes to sit in front of the tv or to have dinner with friends. He really enjoys travelling, Italy and Australia are his favourite places in the world.

Q. You’re standing in front of a pic ’n’ mix stand, which sweet do you pick first?

A. Wine gums!!!! I asked if he liked any colour in particular. Any, all of them at once, although he hasn’t seen how many he can fit it at once yet, will try that later.