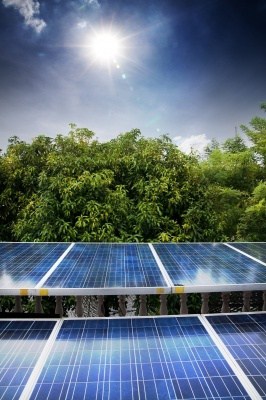 Harnessing the power of the solar panels . . .

We seem to have been quite lucky with the weather so far this summer (ok so perhaps not today as I write this post and it’s precipitating rather a lot outside of my window). The sun has been shining and any wet periods that we have had seem to clear up quite quickly and there’s one thing that I always question as I do the school runs on sunny days and that’s about how good solar panels really are. On the school run to Beanie Boy’s preschool I pass approximately 20-30 houses with solar panels on their roof which over a distance of just 2.5 miles is quite a lot of houses. I’ve noticed that many new builds are equipped with a solar panel from the word ‘go’ and over the past couple of years I’ve noticed a big increase in the number of them as a whole throughout my local town.

A couple of weeks ago I was at a friends house which I hadn’t been to in a while and noticed that they had panels on their roof so I was finally able to ask them if they would recommend them and they said ‘yes’ without hesitation. They said that the house they were in was the one they had bought as their ‘forever home’ and they had done their homework on the whole ‘solar energy thing’ and had been told that providing you were planning on staying in your property for the next 10-15 years then solar energy would definitely be a bonus to them as they would have recouped their initial payout and would be reaping the benefits of the harnessing the power of the sun AND they would be protecting the environment by reducing their carbon footprint. By going solar they would be protecting themselves against the rising cost of electricity. It is definitely something which we would consider having installed.

Do you have solar panels on your home and if so, what are your thoughts I would love to know?