Depending on which way you want to look at it we were lucky enough to get LOADS of snow last night and woke up to a beautiful white vista this morning. We are all a bit slow to get moving in a morning so it was no surprise when we opened the curtains to see that our neighbours MummyBird and family had already built an 8ft snowman!! Beanie Boy kept pointing at it declaring “MAN!”.

As we prepared Little Bean and her cousins to go out in the garden to enjoy the snow we realised that poor Beanie Boy didn’t have any wellies so he had his nap whilst the others and I played in the garden, building snowmen and having a snowball fight and Hubby popped out to the shops to pick up some wellies for Beanie Boy so that he could venture out when he woke up.

As his feet touched the snow for the first time in his life, his face held a look of horror mixed with excitement, he really wasn’t sure what to think. One minute he was laughing and smiling, the next in tears, then back to laughing again. I think he just felt unsure on his feet, he wasn’t used to wearing wellies which were quite firm to walk in, the snow was slippery but yet he didn’t want to go back inside. As for Little Bean and her cousins, they had a great time – there’s nothing better than hearing the laughter of little ones and today there was laughter in abundance – perfect! 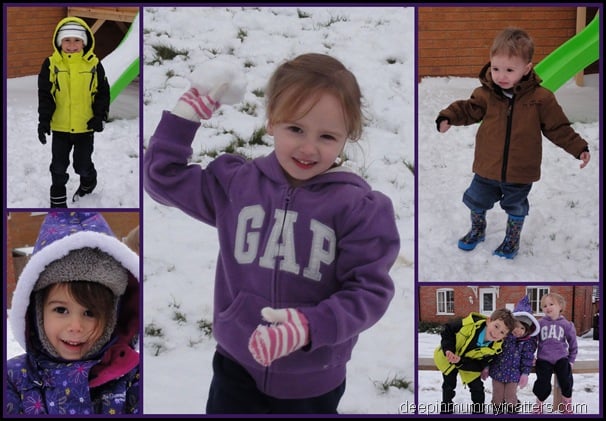