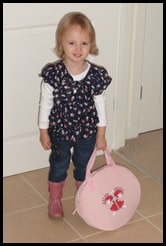 That is the song that goes round and round in my head most days when having conversations with Little Bean.  Little Bean is an extremely headstrong little girl, I’m told that she gets it from me – oops!  But how should we parent her and channel this personality trait so that our time with her isn’t a constant battle?

Both Hubby and I have found ourselves constantly having to bribe/threaten her in order to get the behaviour we want – something along the lines of:-

I think you can get the picture!

This kind of thing happens at least two or three times a day and its very soul-destroying because we feel like we are constantly battling with her for some kind of leadership.  Another phrase often heard in our house is “who’s the boss?”, sometimes we get “Mummy” or “Daddy” but we regularly get “Little Bean”.

We have arguments over what shoes she is going to wear when we go out, I’ve tried to give her two options so that she feels like she has some say but this doesn’t always work.

For goodness sake, she even tells me off if I don’t give her the right spoon to eat with.  I could understand this if I’ve always been a pushover with her and bowed to her every whim but I haven’t.  I do believe that children should be able to make their own decisions to a certain extent but only in that I give her two options, she chooses one.  But how on earth should we go forward with her so that we have an out of control teenager on our hands that has no regard for our authority?

We use the naughty step, which she hates, but I don’t think she associates her behaviour with the punishment.  I always ask her why Mummy has put her on the step and if she doesn’t know why I tell her.  I always ask her to look me directly in the eye whilst I’m talking to her, which she does, but all she wants to do is get the “sorry” bit over and done with and get off the step.

We have tried confiscating toys but as with most children these days, she has so many toys that it doesn’t really bother her.  The one thing that I do always do is follow through with whatever I have said to her, I never go back on my word but still it doesn’t get through to her.

How do you handle your pig-headed strong-willed little darlings?  Where do you think we are going wrong?