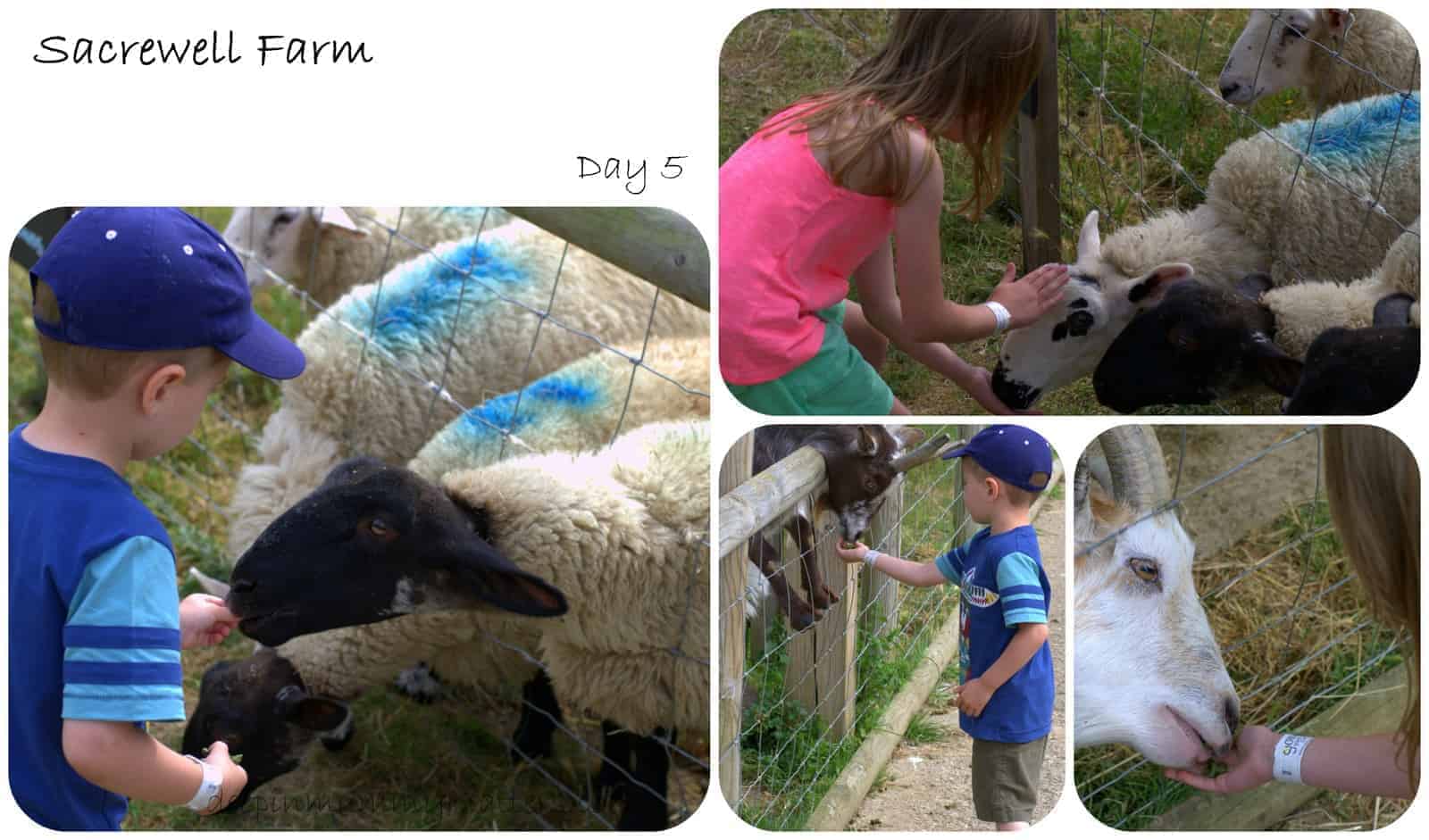 Have you noticed I’m missing a day’s post? That’s because I completely forgot to take any photographs on day 4. We had a busy day rushing around Lincoln and I forgot to take my camera with me. In the evening Hubby popped over to take back all the things that we wouldn’t need on our last day so that we didn’t have so much to pack up on our last morning. Sadly through the night my Mum was taken very ill and had to go home early the next morning which meant I needed to call Hubby to come back to help me to take the tent down and pack up before he went to work. My initial reaction had been to just head straight home ourselves but the sun was shining so I asked the Beans what they wanted to do and they said they wanted to spend the day at Sacrewell Farm again so that’s exactly what we did. 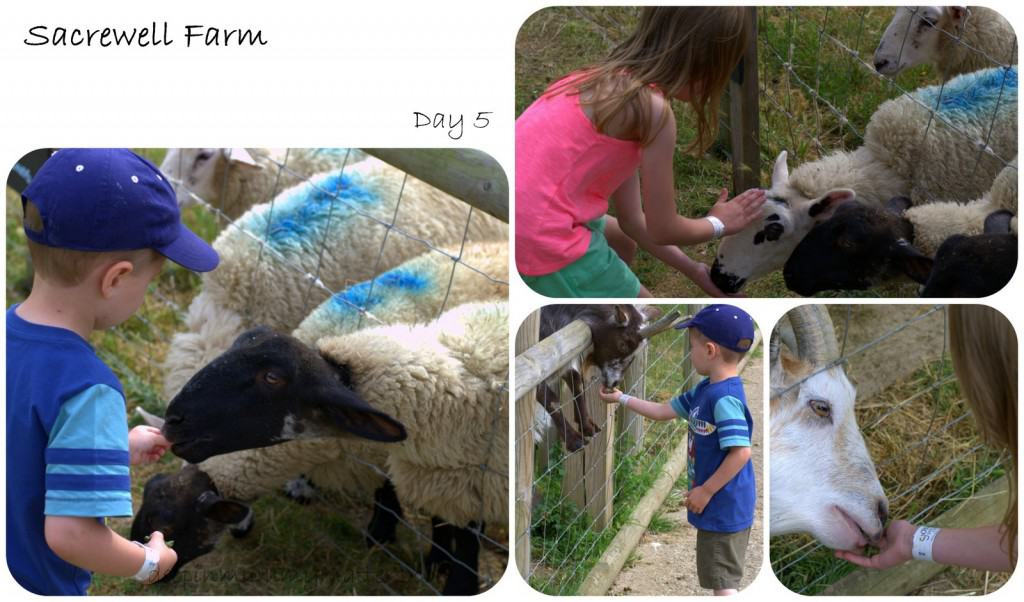 We bought some food for the animals and the Beans got stuck right in feeding their favourites. I tried giving Jelly Bean food to feed the animals but he was more interested in eating it himself so I ditched that idea. 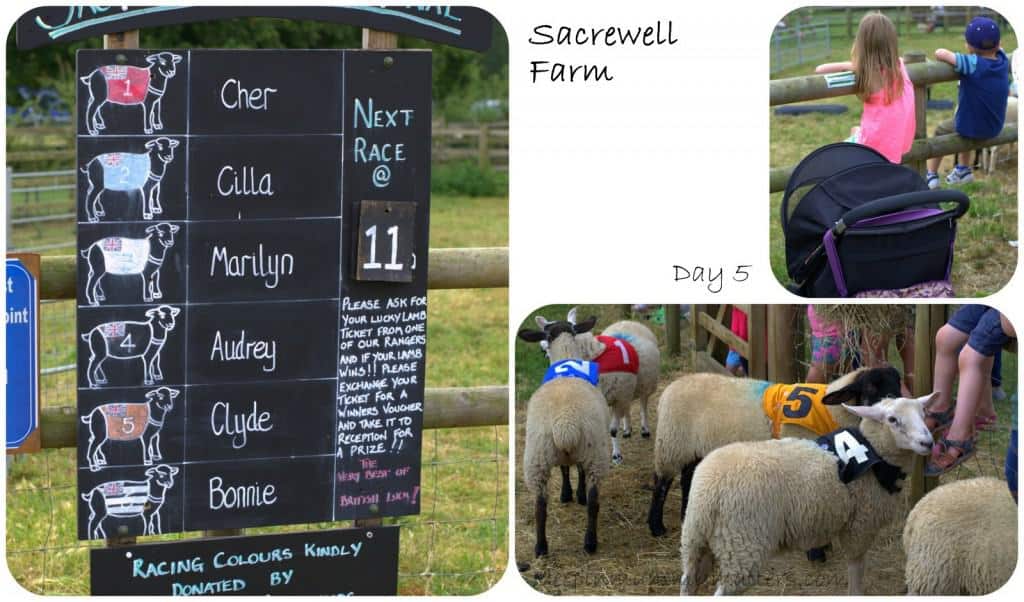 We had lots of fun watching the Sheep Race but sadly we didn’t back the winner on this occasion. 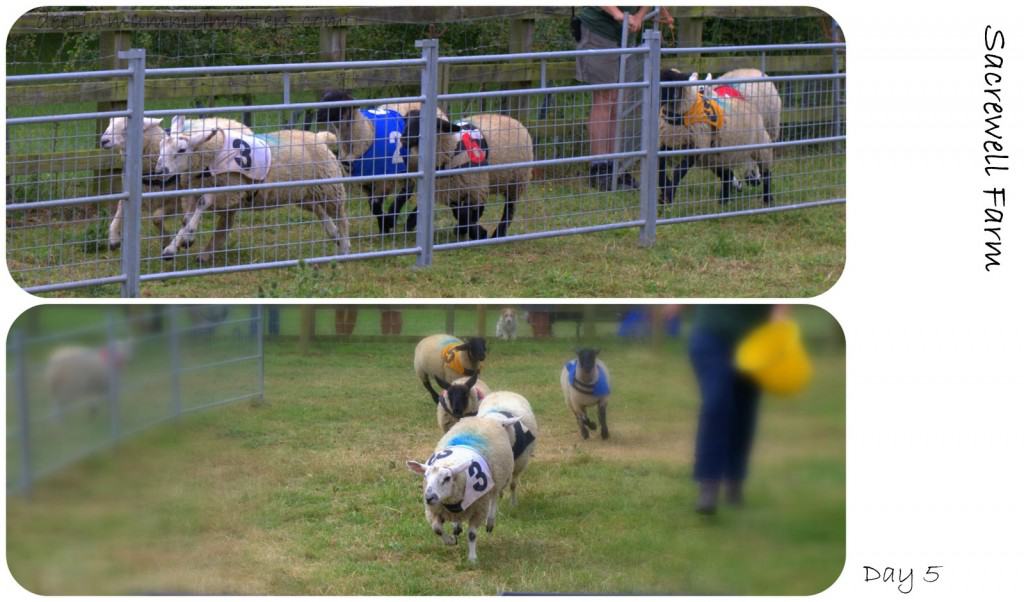 After the sheep race we managed to squeeze in just enough time to feed the hens and say hello to one of the ponies before going on a tractor ride around the farm. 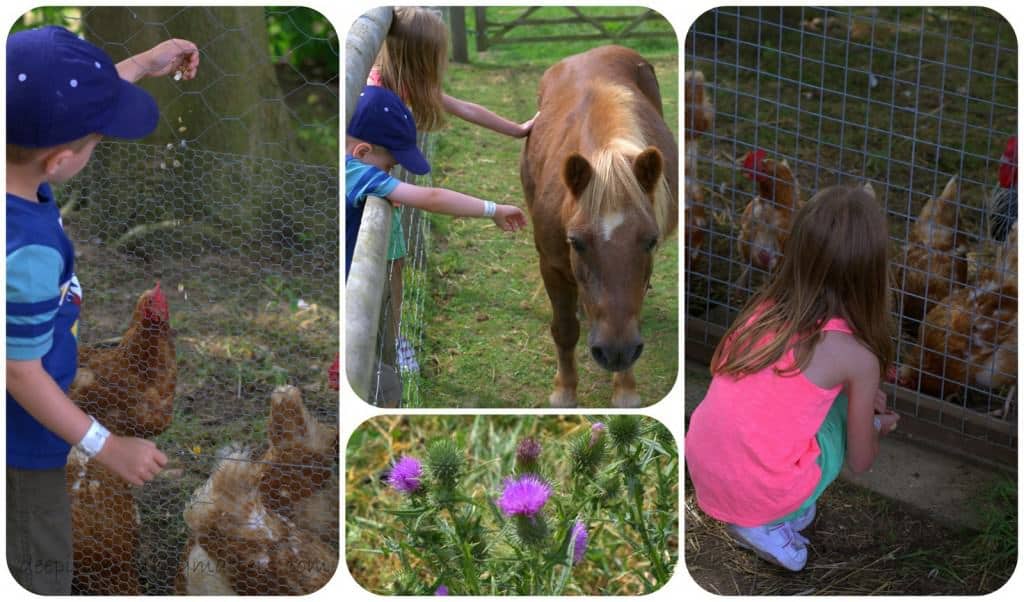 Jelly Bean was hilarious on the tractor ride, he LOVED it. He squealed and chattered with delight for the entire journey pointing at things excitedly. 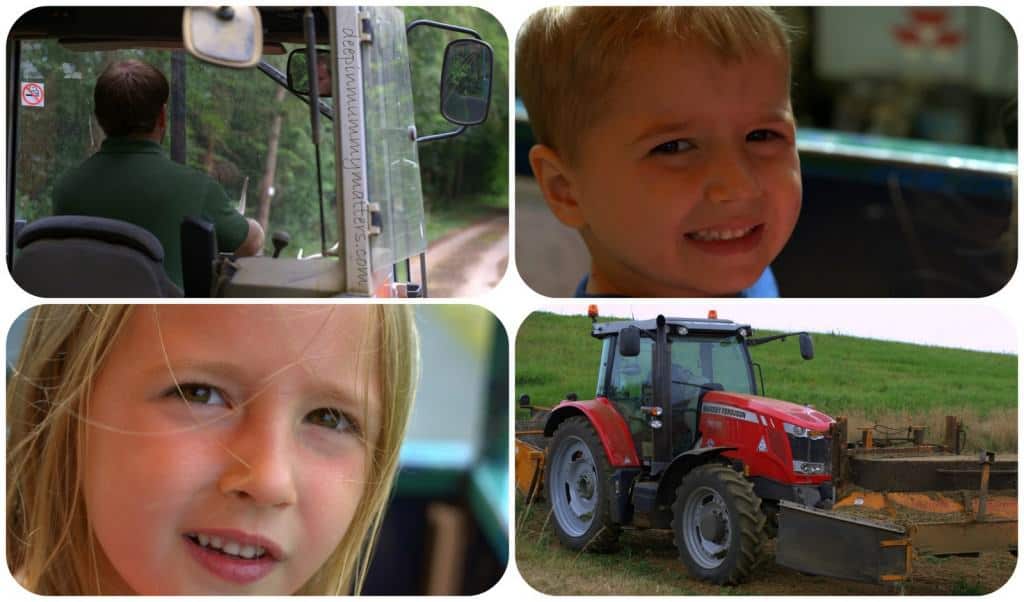 After the tractor ride it was time for lunch so we went to the restaurant in the main building. We hadn’t been in there all week and so I was very impressed when I saw the facelift (it’s probably a couple years old now as I haven’t been since Beanie Boy was a baby). The food was delicious and fairly well priced. The Beans chose to have a ‘fill-your-own’ lunchbag and made me very happy when they actually selected relatively healthily for them AND ate the lot! 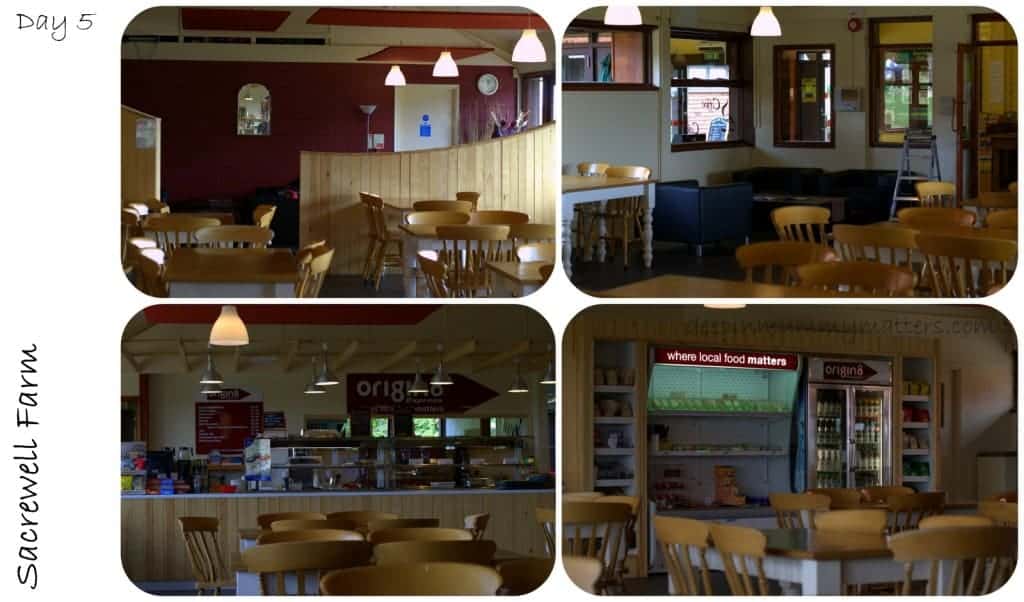 After lunch we went for a walk to let our food go down and found ourselves at the Pooh Sticks bridge just in time for the Duck Race so we chose a duck for each of the Beans and then kept our fingers crossed. Poor Beanie Boy got knocked over by a few of the bigger children in the rush to see the ducks enter the water and ended up with a bleeding knee but one of the kind Sacrewell ladies picked him up and dusted him off. 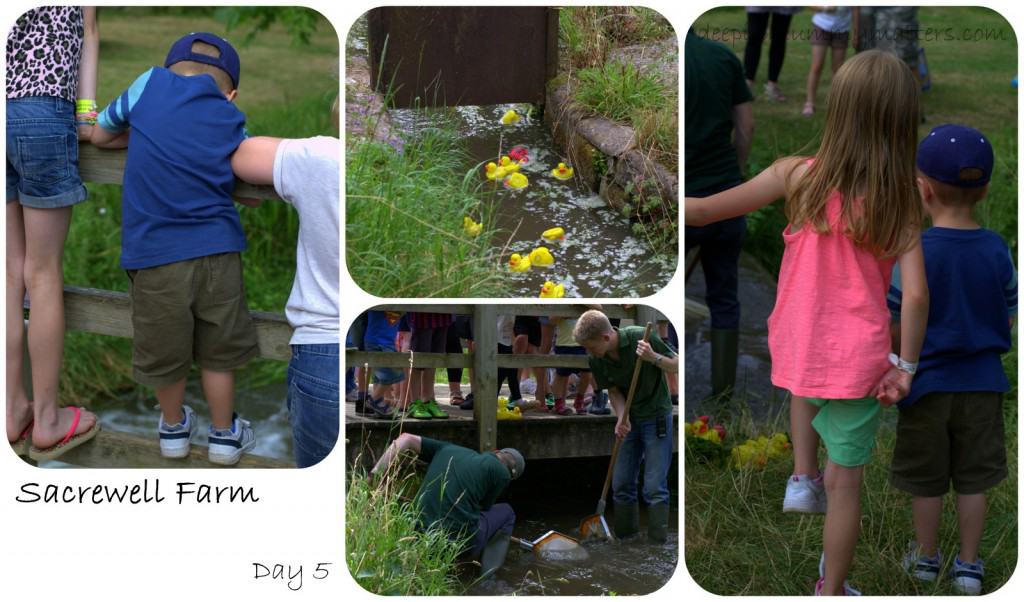 They waited very patiently to see if their ducks were a winner but sadly our luck was not in on that day so we had a few tears from some very tired Beans. 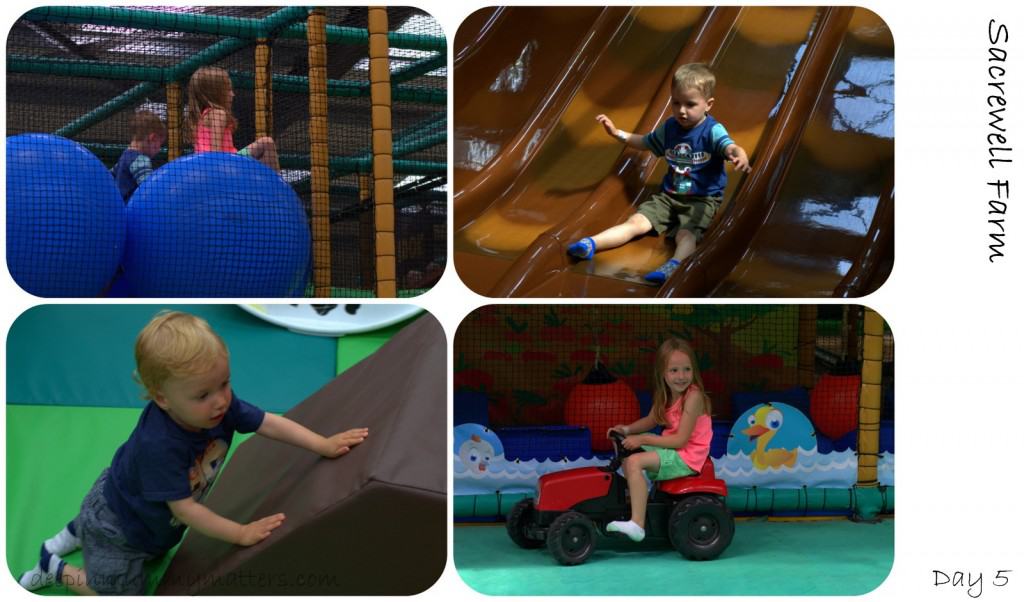 Since Beanie Boy had chickenpox at the start of our holiday I had kept them away from the Soft Play but thankfully after using Virasoothe religiously for the week his spots dried up really quickly and so we were able to go in and see what we had been missing. I felt a huge pang of disappointment that we had needed to keep them away for so long because the Soft Play area was BRILLIANT and they would have loved playing in there every morning. There was something for all of them to enjoy, even Jelly Bean got stuck right in. Luckily for me, Jelly Bean fell asleep in his pushchair after all his exercise so whilst the bigger Beans played with their new-found friends, I was able to enjoy a coffee and some quiet time reading a magazine for a whole hour! BLISS!! 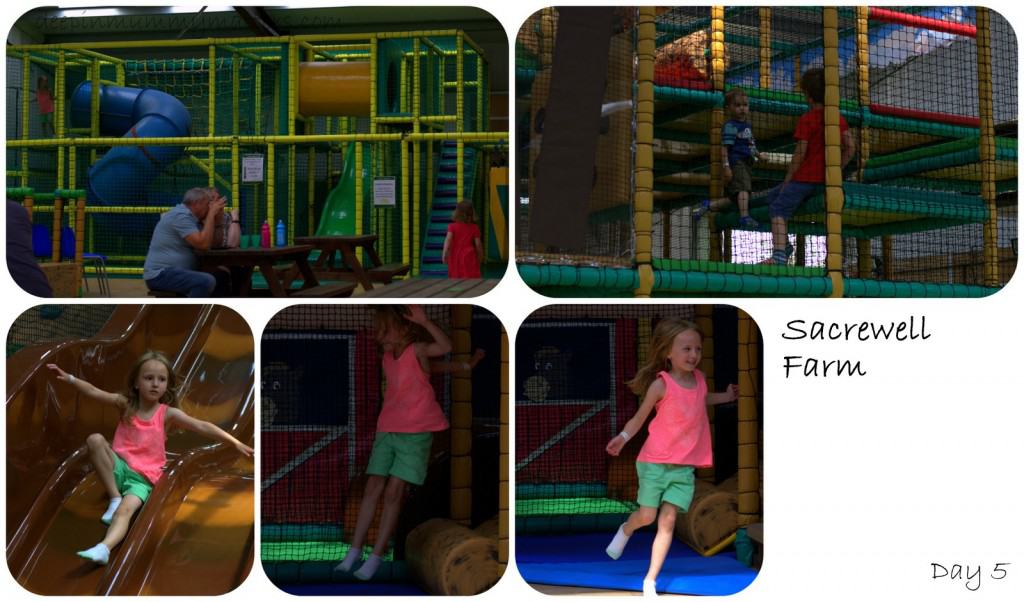 Once Jelly Bean had woken up we decided it was time to start saying goodbye to the animals and the shire horses William and General were top of their list. 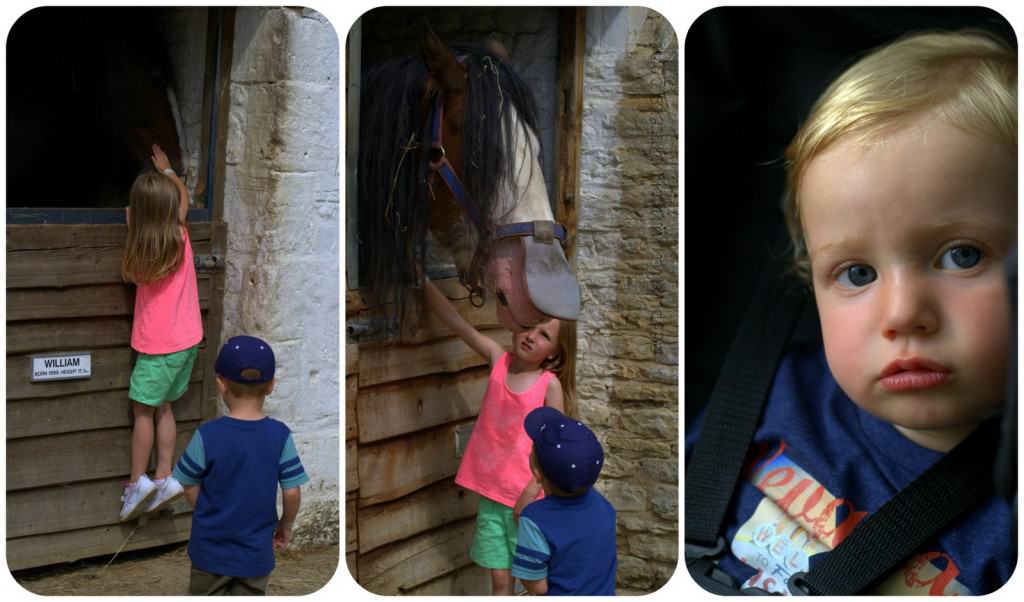 We had a slow walk back through the farm to say goodbye and thank you for a lovely week of outdoor fun and to my delight the Beans asked if we could come back again soon so it was obviously a successful holiday from their perspective too. 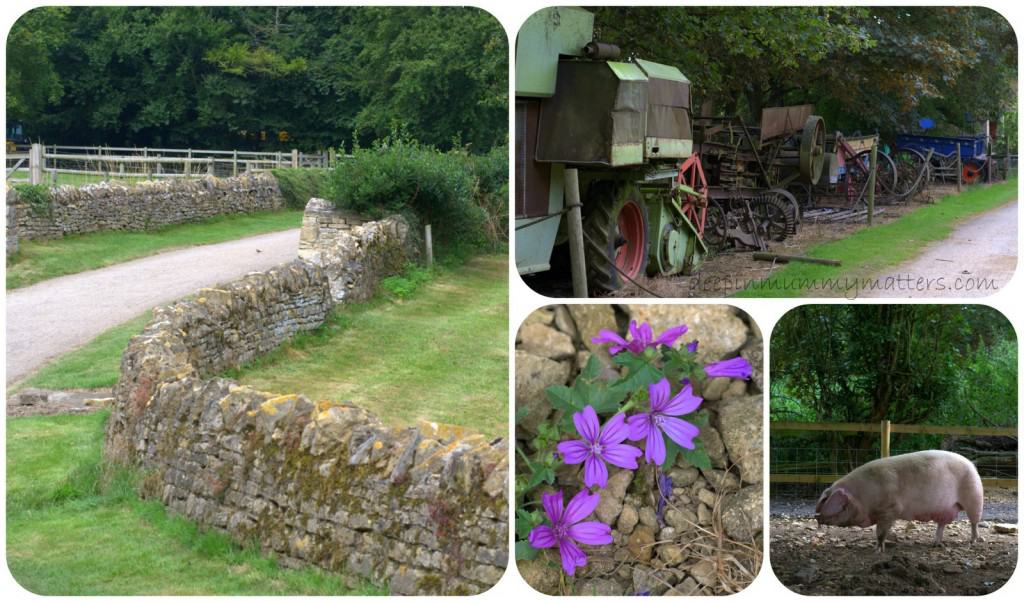 As we reached the play area for one last swing and slide, the Beans spotted in was time for the last sheep race of the day. They excitedly chose No 3 (the winner from the morning) despite my best efforts to suggest she might be tired out from the morning race and nothing could quite contain their disappointment when they didn’t win for a third time that day. I feared it was most definitely time to get my tired little Beans in the car and homeward bound. 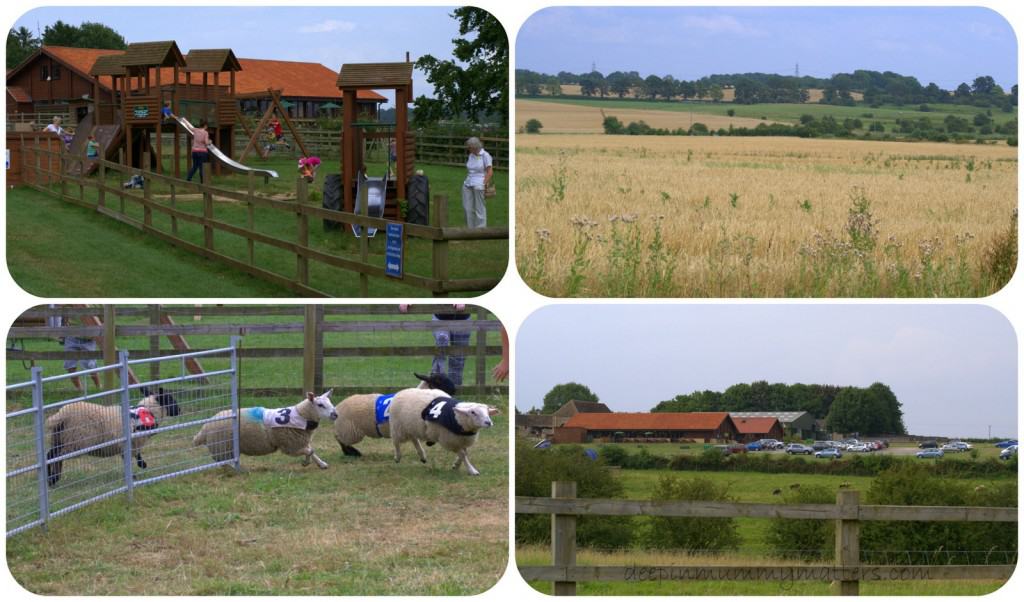 But as with most things when you have small children, even the journey home wasn’t without it’s dramas as Jelly Bean was sick all over himself, his car seat and my camera bag as we were driving through Stamford and once again when we got home. Not quite the perfect end to our Sacrewell Farm holiday but at least we were now home.