When I Was A Kid I had a Weebles Police Station and I loved it! So I was quite excited and feeling very nostalgic when we were given the Pintoy Police Station Set to review for When I Was A Kid. I had such grand plans for how I would review the Pintoy Police Station Set for, in my mind I saw blue flashing lights, Juliet Bravo music playing in the background and me with my screwdriver at the ready to show you just how easy it is to build. It was all going so well, I found a quiet area of the house, I set the camera rolling, I began building the Police Station (following the instructions of course!) and on the announcement of “ta-da” I looked up to see the camera had stopped rolling and I was talking to myself. Upon checking the camera, it turned out the camera stopped pretty much before I’d even started building so I had NOTHING to show you and I’m sorry I’m just not committed enough to take it apart and build it again.

Not to be deterred my next grand plan for a video review was to show you Little Bean playing happily with the Police Station (as she has been) but perhaps a little more staged than usual. I wanted her to give you a guided tour of the station and all its little features but at the grand old age of three years old, she is becoming a little camera shy to say the least. I tried bribery rewarding her with chocolate buttons but even this wouldn’t cajole her into performing for the camera, this is Curly’s domain and he’s on holiday, Beanie Boy was more than happy to have a go though!!

So I have had to resort to photographs because I’m afraid I’m rubbish when it comes to ‘playing’ with figures, I’m more your arts and crafts type of Mummy though I do try.

The car comes pre-assembled which is great because you can give that to little one to keep them amused whilst you do the DIY bit on the actual station. Everything is really well packaged so that nothing can get scratched or bumped in the box. I was a good girl and laid everything out, checked to see that I had it all and began building. I was doing really well until it came to putting the roof on with the screws as I am a bit of a weakling when it comes to screws so I had to pump iron for a few minutes to get my strength up. Only kidding, I just had to put a little more effort it but the Police Station was built and ready to play with in less than 15 minutes (I’ve had practice with the odd bit of flat-pack furniture over the years).

Once built the Police Station is extremely sturdy and very impressive, Beanie Boy likes to prove just how sturdy it is by sitting on the top of it pretending to be King Kong much to Little Bean’s disgust! 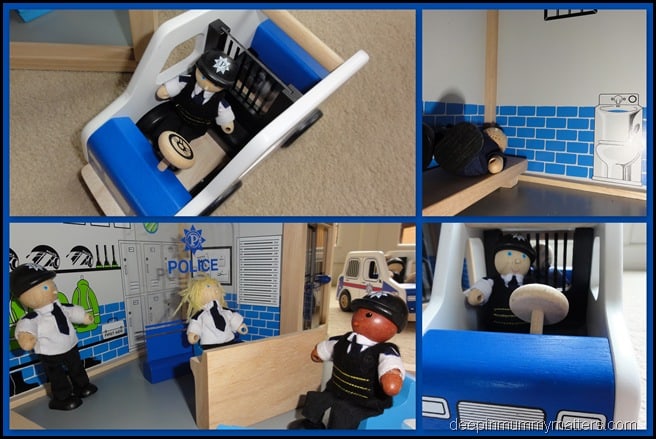 I love the attention to detail, the walls on the inside of the office have jackets, helmets, boots, torches, certificates, clock, lockers, traffic cones, fire extinguisher, height chart to take a photo of the criminals in front of and notice board on them. There is a privacy screen which can be moved around along with a desk, swivel chair and two further chairs for the Policemen/woman to sit at whilst booking in the ‘naughty man’. Next to the Police Station Reception is the holding cell or ‘time-out’ room as it has come to be known in our house which has a sliding door with bars painted on it. Once inside the details on the walls are clear again, a toilet/sink for the prisoner and a bed for him to sleep on and contemplate his naughty ways.

The Police Car has probably caused the most arguments since it arrived because Beanie Boy loves it and wheels it away to a different room so that he can have it all to himself. The roof of the car lifts off so that you can put the Policeman/woman into the driving seat and the naughty man in the back, unless your children have been watching too many action films and the naughty man has hijacked the police car and taken the Policeman hostage – no? Just me then!

The Police Station Set comes with a box of four figures, two Policemen, one Policewoman and a Criminal and then the car came with a further Policeman so you’re all set for a day of crimefighting. All the figures have posable arms and legs so they can walk, sit or stand however your little one desires.

As with all Pintoy products the wood is of very high quality built to last, the paints are lovely vibrant colours and safe for the little ones. We’ve got our eye on the Fire Station next as we want to build a town and Mummy quite likes the idea of a few more servicemen around!

To see more of the range of wooden toys available from When I Was A Kid click on the logo below, you will not be disappointed by their outstanding customer service and great choice of delivery options. Why buy from anywhere else?

When I Was A Kidwooden toys