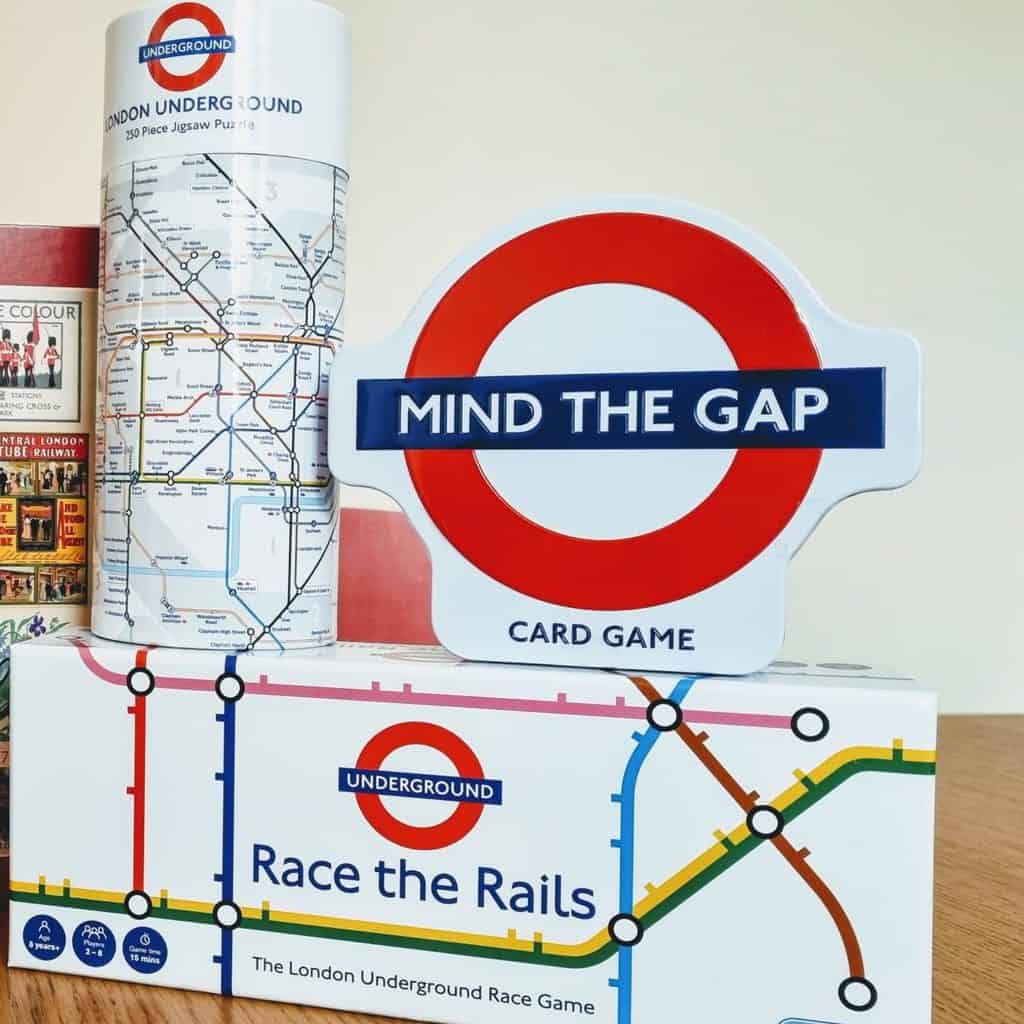 All Aboard for a Gibsons Games Giveaway #ad

Disclaimer: We have been given the games and puzzles by Gibsons Games featured in this post to give an honest review for our readers.

Gibsons have come together with Transport for London (TFL) to create a series of Limited Edition games, puzzles and card games. Today we are going to be sharing our thoughts on these with you.

You only need to take one look in our games cupboard to see that we are a family who loves to play games and do puzzles. Games nights are a brilliant way of bringing the family together for a bit of light competition and laughter; they can be brought out at dinner parties, fill time on a rainy day at home or whenever the mood takes you.

On a rainy Saturday afternoon, we cleared the dining room table and challenged the children to a games afternoon, starting with Race the Rails. This game is aimed at players aged 8+ years.

Race the Rails is a fun and fast-paced game of observation where each player has to race their way across the iconic London underground, making sure they get all their connections on time and in the right order.

At the start of the game, each player receives their Station Card, which doubles as an Assistance Required card, two pennies, a playing piece and their answer sheet.

Each player places their playing piece on their starting station and then has to race the other players to find their next station, noting the connecting station and time. The winner is the player to make it through all their stations in the correct order. The journeys written down are checked at the end against the Solution card to ensure mistakes haven’t been made in the race to win.

Gameplay can be slowed down if you land on a milestone card symbol or if one of the other players reveals their Assistance Required card. There is a handy instructional video on the Gibsons Games website which fully explains how to play the game.

We really enjoyed playing this game. It was easy enough for Albie to play without requiring too much assistance from anyone else. It kept everyone moving because we placed our cards around the edge of the dining table. Hence, we all had to move around the table to find our stations. In case you’re wondering . . I WON!!

Mind the Gap is a game of speed and wit where the aim is to get rid of all your cards before the rest of the players. Ollie described it as Uno with Underground Stations and I can see what he meant. This game is aimed at players aged 6+ years.

What’s in the tin?

At the start of the game the cards are shuffled and each player is dealt 8 cards. On their turn a player must lay down a card which has the same tube line colour. If they cannot lay a card they must select one from the top of the draw pile instead.

Players can throw a spanner in the works by laying down a special turn card which means other players may have to miss a turn, give cards away or all switch cards.

We all really enjoyed this game, it was fast-thinking, and we liked the chance to mess things up for our opponents (yes, we are a competitive family). We all commented that this is a game we will definitely be taking away with us on our camping trips this Summer. In case you were wondering again . . . I WON!!! AGAIN!!!

As well as the two games mentioned above, we also received two puzzles. So far we have only managed to complete one of them but we have just started building works on our house so it’s a bit chaotic at the moment.

I asked the Beans which puzzle they wanted to try first and they all chose the London Underground Map (250 pieces). In total it probably took us a little over an hour to complete with 2-3 of us working on it at a time. It was a fun puzzle to do, the words an the coloured lines definitely helped. What didn’t help was Dobby running off with two pieces of the puzzle in his mouth which we had accidentally knocked onto the floor.

As you can see from the picture at the start of this post, we also received the Heritage Posters Puzzle (1000 pieces) but we will save that one for another rainy day (we seem to be getting enough of them).

Your Chance to WIN!!!

For your chance to win both Race and Rails and Mind the Gap games, complete the Gleam application form below.

GIBSONS Race the Rails Giveaway
Board Gamescard gamesGames and HobbiesPuzzles