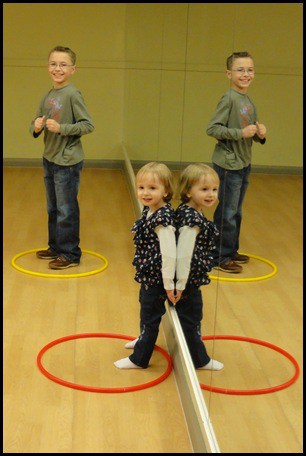 Little Bean was invited to her friends 3rd birthday party today and had a brilliant time, normally I dread kiddies parties but this was a really good one held at a local gym creche.  First off there was fun and games on a bouncy castle and games room before heading through to the disco room.  The idea with the hoops was to play ‘musical hoops’ but it seemed far too much like hard work trying to explain to a bunch of 3 year olds how to play the game.  It went some like this:-

“Ok everyone stand in a hoop so I know how many hoops I need to take away” – all children ran around like crazed mice.

The organiser then did a quick head count and removed the necessary hoops.

“Ok children, dance around to the music, when the music stops you need to stand in a hoop – the one without a hoop will be out” – clever children, some of them danced, half of them picked up their hoop and danced with it.

The organiser then decided “Ok shall we just play with the parachute instead?”.

I managed to capture this photograph of Curly and Little Bean while the ‘rules’ were being explained, I love them both to bits but I wouldn’t want two of each of them, they wouldn’t be unique then!

Funny thing at the party though, I saw a girl I thought I recognised, upon speaking to her she went to the same school as me which is about 50miles from here.  She doesn’t live here, or where we were both from, she was visiting a friend who came to the party.  What a small world!