Our camping season for 2019 began with a short break to Woodhall Spa Camping and Caravanning Club site to test out Coleman’s new for 2019 tents, the Coleman Pinto 5 Man Plus XL and the Kobuk Valley 2. Will is 17 now so it’s time for him to have his own space when camping. We visited the site again in August 2019 so this post has now been updated.

We chose the Woodhall Spa site as it is only an hour’s drive from Peterborough making it perfect for a short camping break. The site is situated just outside of Woodhall Spa but beware there is another Camping and Caravanning listed site in Woodhall Spa. The club site is set in the countryside away from the hustle and bustle of the popular village. The sat nav finds the site easily when coming from the South but when coming back from Woodhall Spa itself it takes you to a farm just a short drive down the road. It would appear that the farmer is a little fed up with people stopping to ask if they have arrived at the campsite because he has a sign on his gatepost saying “not a campsite”. If you continue driving along the road for another 5 minutes the campsite is on your right.

Upon arrival, we were behind another family checking in but we were still processed within 10 minutes. We received a warm welcome from the Reception team who advised us on the best place to camp with the children. Together we decided on a pitch next to the enclosed ball area and play area so the children could play in plain sight of the tent.

The lovely lady on reception asked whether we had camped at Kelvedon Hatch last year. When I responded that we had, she said she recognised me as they were the management team at Kelvedon last year. How lovely that they remembered us. The site managers generally serve three years at a site before moving to a new site so regulars will get used to seeing familiar faces which is really nice

They have a brand new purpose-built amenities block which houses the men and ladies WC/Shower rooms, a family bathroom, disabled access bathroom, chemical toilet sluice, laundry room and washing up facilities. At the time that we stayed the site was having a few teething troubles with workmen on site so I was unable to get photos of the family room since they were working in it.

I am delighted to say that the problems with the drainage have all be fixed and the bathrooms were working perfectly when we visited for a weekend break. The facilities were kept beautifully clean and were in good working order. 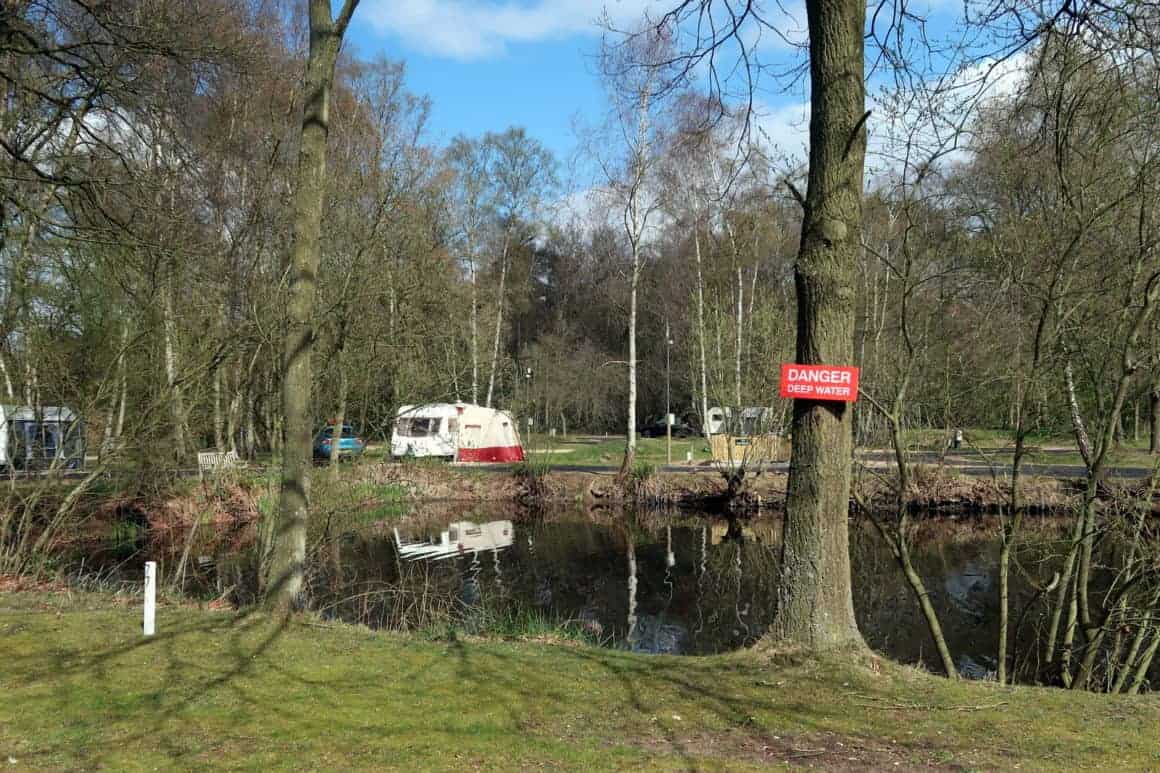 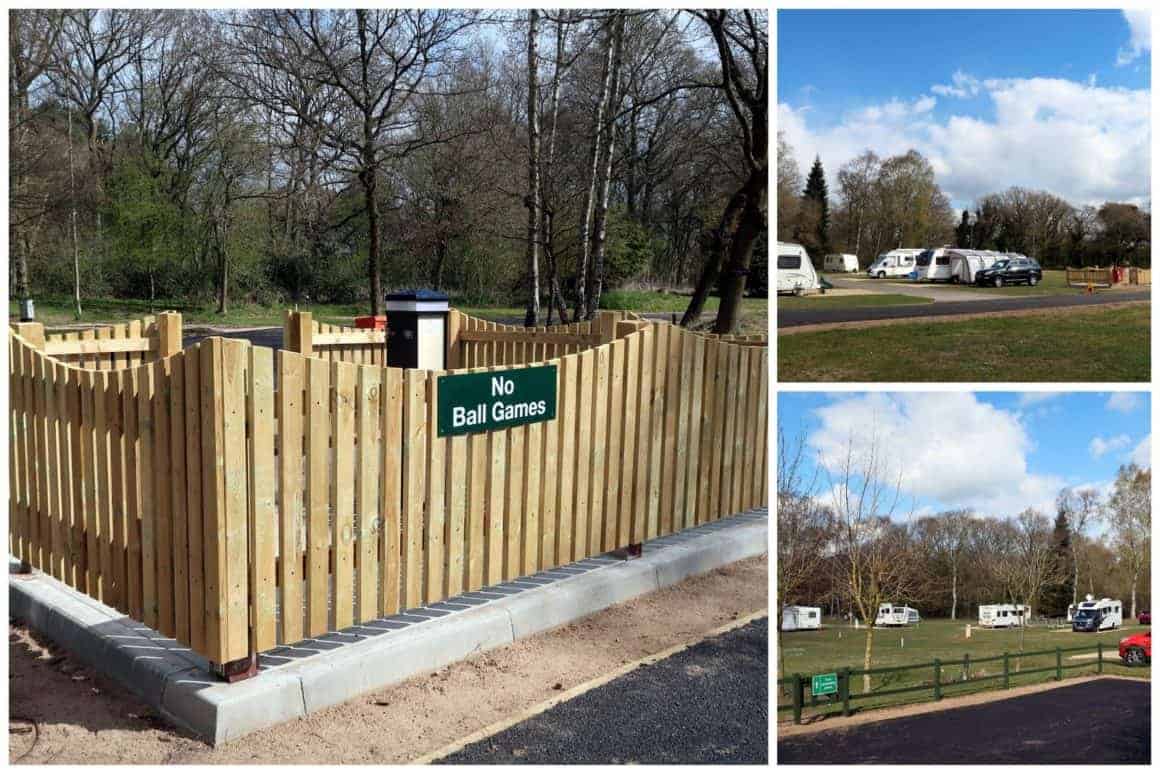 There were three main camping areas at Woodhall Spa club site and each area had it’s own water and fire point. They are all dimly lit at night but you would be recommended to carry a torch as the site can be quite dark. The refuse disposal area is situated next to the Reception block, refuse did not require separating into recycling and general waste. 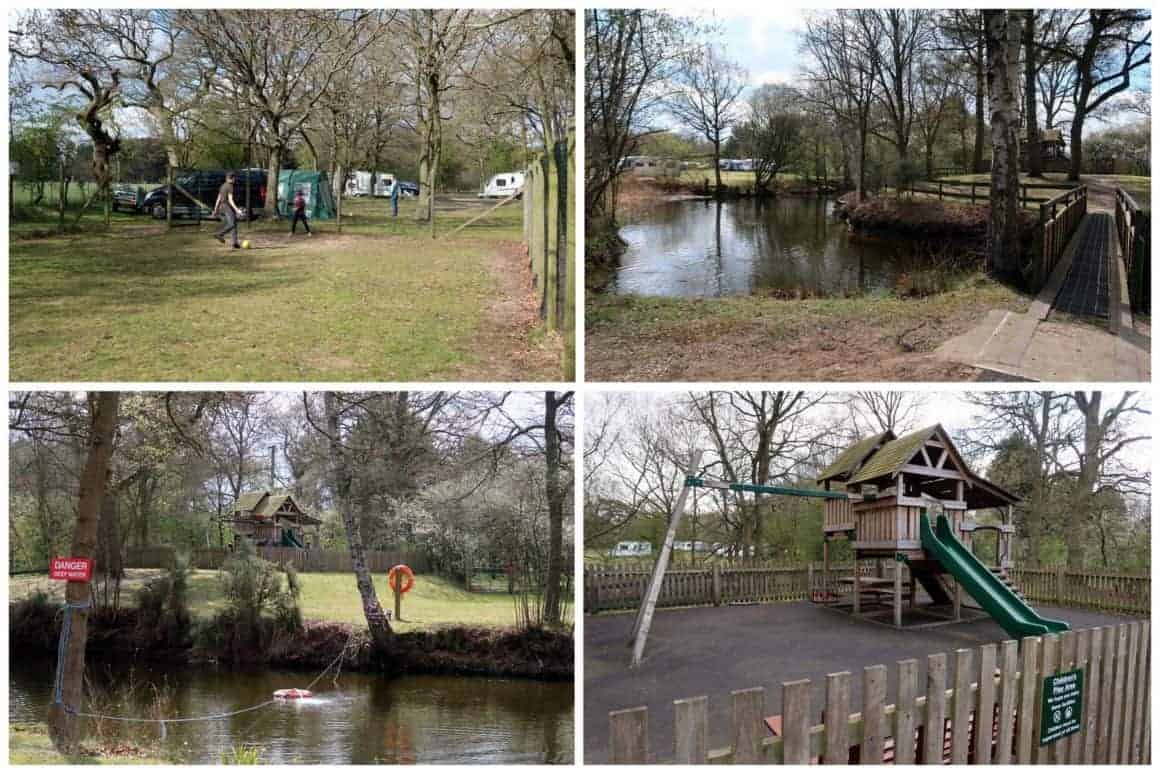 The adventure playground is situated behind the pond in the centre of the site inside a fenced playground. There are also fences around the edge of the pond closest to the play area. Access can be gained by walking around the back, across the bridge or along the bank from the far left back section of the camping site. 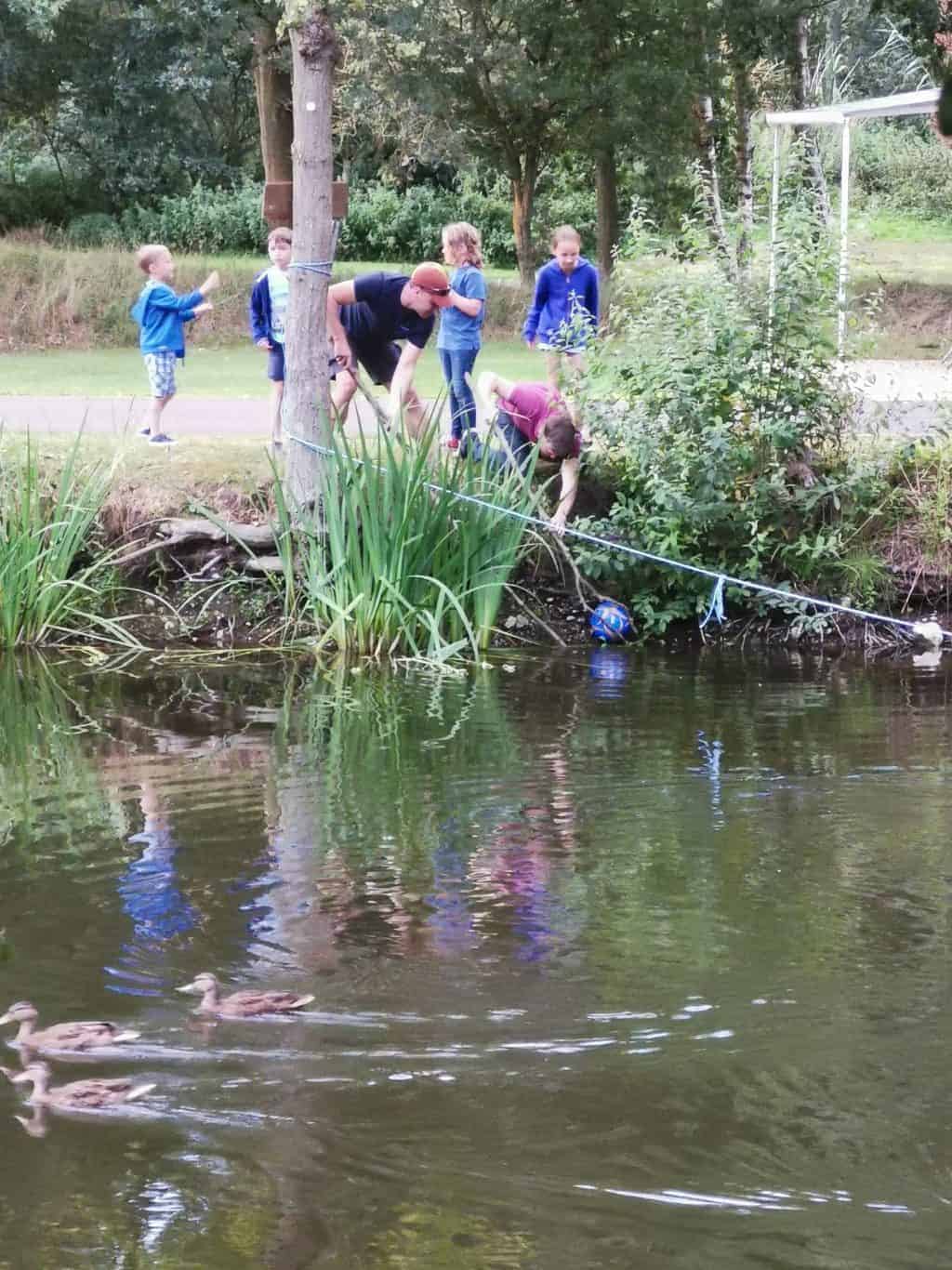 Next to this is also an enclosed ball area which the Beans loved, very often campsites do not allow ball games so this was a very welcome sight and kept them occupied until the light of the day had gone. Just be wary of those with an over-zealous kick. Twice our football ended up flying over the fence and landing in the pond. Luckily there is a filter in the middle of the pond which eventually pushed the ball to the side of the pond where the Dads were able to retrieve it. 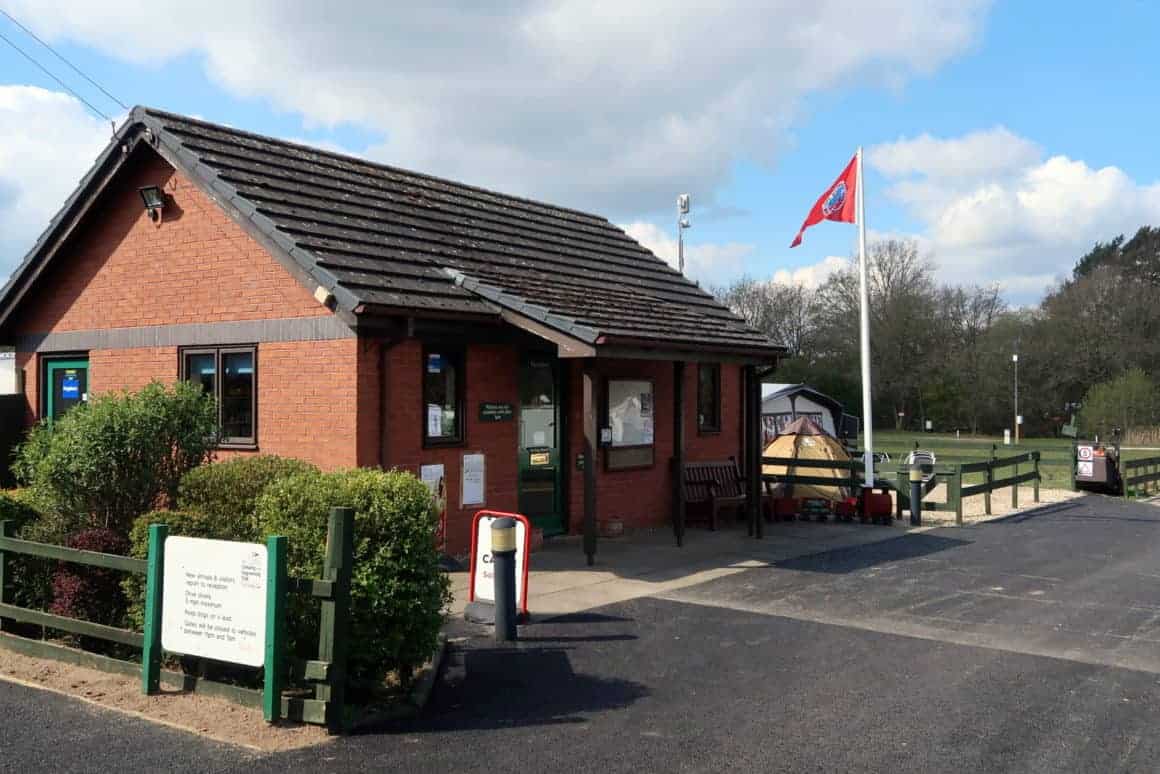 Local information leaflets are displayed in the Reception office during opening hours.

We did find this site to be particularly dark in the evenings, perhaps because it is away from the local town with no residual light? Walking from our pitch to the amenities block after dark meant crossing the bridge (if you were too lazy to walk around the pond) and this was quite difficult without a torch as the lights from the amenities block obscured your view of the bridge. There is running water into the centre of the pond at all times so you know when you are getting close. You will definitely need to take a torch with you.

The dog walking area runs along the back of the children’s play area and offers a large open area of land which is secure enough for you to let your dog off the lead. It is accessible from both the front and back of the site and has dog bins at both ends so no excuses!!

This year all club sites will offer free access to the wifi for their guests. The access code was shown on a noticeboard just inside the washroom door. There are Wifi boosters situated around the site so I found the signal to be very good wherever I went on site. This was a big plus point for our stay at Woodhall Spa as it meant that I could keep up with emails and the children could listen to music at bedtime without using up my data allowance.

Woodhall Spa Camping and Caravanning Site consisted of three main camping areas, two of which offered hard-standing pitches and two grass pitches (with or without electric). There are more than 90 pitches available and all pitches felt spacious and offered a different vista. The whole site was very well maintained with new roads as well as the new amenities block, you could see that a lot of work had gone into the site in recent months. Although I was initially worried about the pond, I needn’t have worried at all, it added to the beauty of the site and thankfully the children all adhered to my rules about only viewing the pond from the safety of the bridge

At the time that we visited I would say the campsite was more than half full on the two main camping areas and very quiet on the third grassy field. In all honesty, I think the only noise on the site came from my spirited little darlings and these little fellas pictured. During the evenings the site was very quiet indeed apart from the odd duck fight. The children slept until just after 7 am which is pretty unheard of for them. 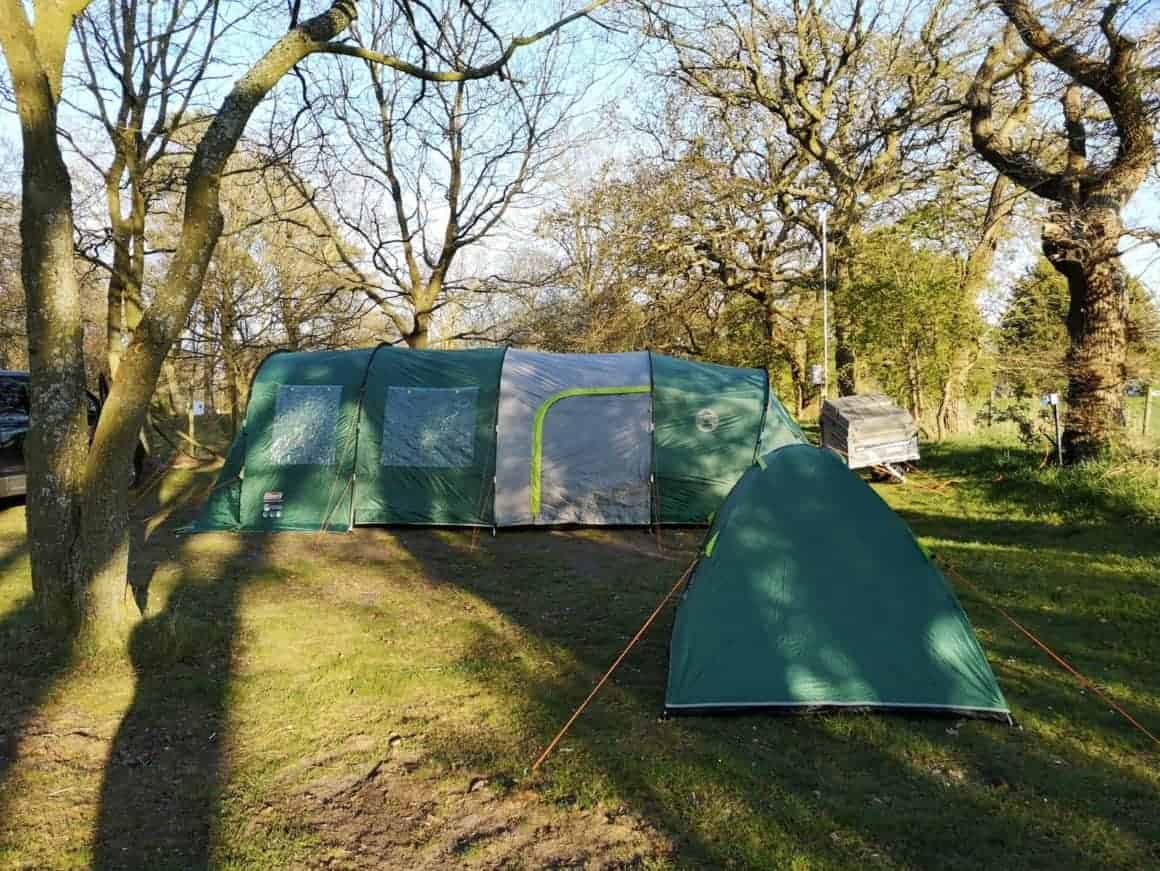 The staff were super friendly and helpful, they would often stop to say hello as they were doing their rounds. They were naturally very worried about the effect of the drainage problems and did all they could to keep disruption to a minimum. It didn’t affect us at all so we had no complaints. The site is impeccably well maintained and is already on our list to revisit for a longer camping break. 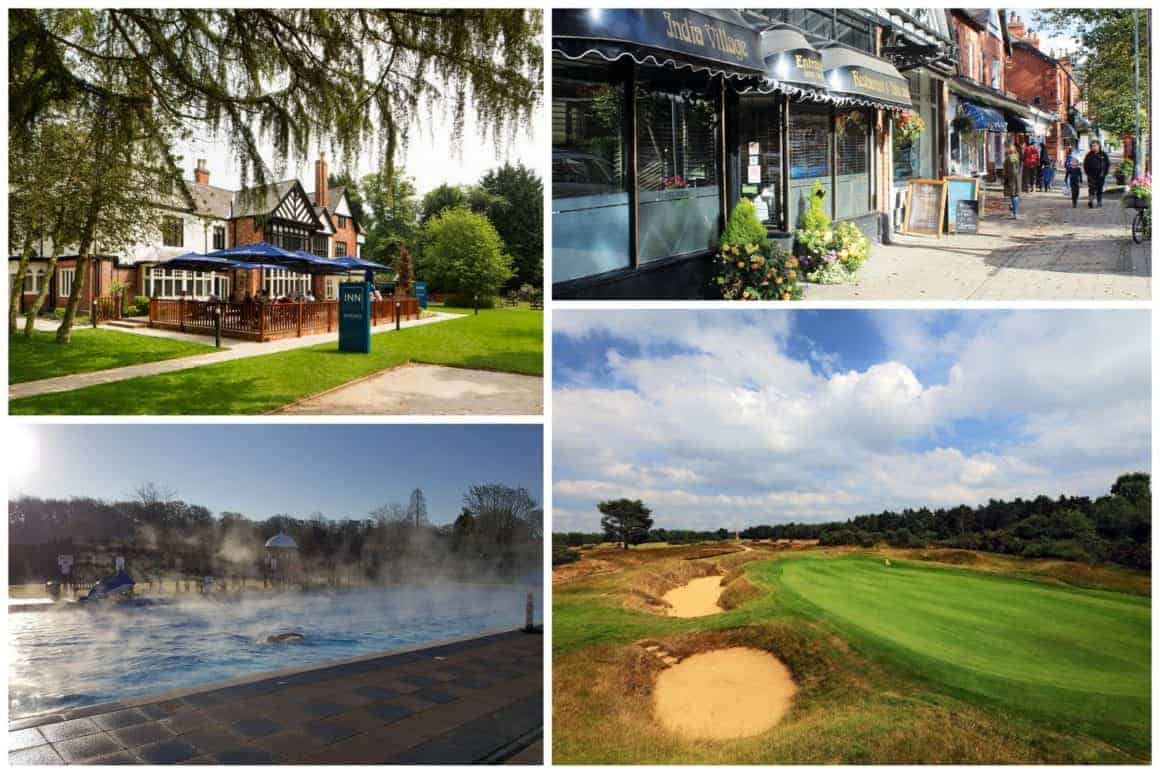 The site was just a five-minute drive from the Woodhall Spa where there are small shops, cafes, the Kinema in the Woods, golf courses, places to eat and the Jubilee Park with outdoor swimming pool. The largest supermarkets in Woodhall Spa are Budgens and Co-op. We needed to find Tesco for our brand-specific fussy eaters which we found at Horncastle, a 20-minute drive away.

On both of our visits, we ate at The Inn at Woodhall Spa which has a fantastic choice of food, excellent customer service and a large enclosed children’s play area in the back garden.

Set in the rural Lincolnshire, Woodhall Spa Camping and Caravanning Club Site offers campers the close proximity to the City of Lincoln or the coastal towns of Skegness and Mablethorpe.

When we visited in August 2019 we travelled slightly further afield to Skegness stopping at National Trust Gunby Hall and enjoyed a lovely afternoon exploring the house and gardens. We topped off our afternoon at the Fairy Dell open-air paddling pool in Skegness. A perfect day out for the whole family.