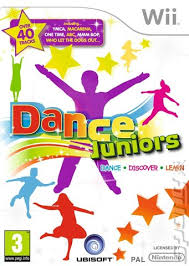 Following on from my reviews of Wii Just Dance 2 and Michael Jackson Experience I was offered the chance for Curly and Little Bean to review Wii Dance Juniors. I didn’t need to think about this for long because I was keen to reclaim Just Dance 2 and MJE for myself, afterall they were MY Christmas presents!!
Dance Juniors has over 40 songs to choose from, ranging from little kids music such as “oh when the saints go marching in” and “ABCDEFG” to older kids music like C&C Music Factory’s – “Gonna make u sweat”. The songs aren’t by the original artists, they sound like they have been sung by children but this doesn’t seem to affect the children’s enjoyment of the game. As with most Wii games you can have up to four players and the controls are very simple to use. For those of you that like to sing along, the lyrics are displayed on the bottom left corner of the screen.
After playing Just Dance and Just Dance 2, I found the graphics on Juniors to be a little poor and the children can be quite hard to follow because of the angle that you are looking at them, you can’t always tell what they are doing with their hands and arms.
What I do like about the game is that you can change the menu’s to suit the child playing the game so that they can select songs more suited to their age range without having to trawl through the full menu. Curly seems to still prefer my Just Dance 2 because he’s very much into my music but he still likes quite a few of the songs on Juniors too. Its certainly a game better suited to Little Bean as she can sing along with some of the songs. She isn’t always keen to hold the remote herself though as it is a little bit too big and cumbersome for her small hands. It doesn’t bother her though, she just likes me to put the songs on and she dances along to them regardless. She hasn’t developed a competitive side yet so the scores mean nothing to her – plenty of time for that!
I think all of these types of games are a fantastic way of encouraging children to exercise whilst still having fun. I would much rather they were playing games like these than a shoot-em-up game, at least gets them up and moving and working on their co-ordination.
Before Wii hit the shops I was never really into video games consoles and I certainly didn’t want my children to use them as they have a tendency to turn into zombies, but the Wii is different. They have games which get you to use your brain, to play as a family and to get up and about. Yesterday whilst out shopping in town I saw the new Wii uDraw Game Tablet being demonstrated, we didn’t have time to play but it looks like another really good addition to the Wii family.