The magic of grandparents . . . 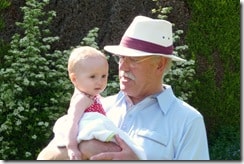 Little Bean and “Brandad”
As mentioned in my post “Happy Families” we went on holiday recently with my Mother and Father-in-Law. Little Bean revelled in spending so much time with them, I think poor Brandad was called upon at least 100 times a day – Brandad sit there, Brandad chase, Brandad help  – you get the picture. Nanny was given special hugs and flowers (well basically daisy heads that she kept picking wherever we went). Each morning we had to bribe encourage Little Bean to go to sleep for her nap by telling her if she went to sleep like a good girl, she could spend the rest of the day with Nanny and Grandad. Hey, it worked!
Curly has always been especially close to his Nanny. From being a baby he has always spent at least one day per week with Nanny and Grandad. He called them “Nanny’s Special Wednesdays”. It is still the case today, Nanny and Grandad pick him up from School and they go out somewhere for the afternoon. I find that children often find it easier to talk to their Grandparents than to their parents, perhaps its the special relationship they have? Curly definitely opens up to Nanny more than he does to me or Hubby. 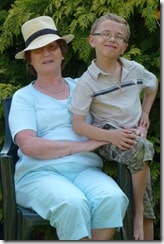 Nanny (in Grandad’s hat) and Curly
Last week, my Mum was away on holiday and Little Bean seemed confused that she hadn’t seen her for so long, asking “Nanna, where is it?” – she still hasn’t grasped , where is she, where are they? On Friday, I popped to my Mum’s house to leave fresh bread, milk etc for her return and Little Bean ran into the house shouting “Nanna, Nanna” and returned to me at the door with a very disappointed face, hands up to the sky, declaring “where is it?”. I told her she was on her holidays and would be coming home on a plane tonight. Her face lifted slightly before she sat down and looked sad once more. But yesterday morning, when the door bell rang she ran through from the garden shouting “Nanna, Nanna” and this time was not disappointed. We spent the day with my Mum and I think it is fair to say, I was surplus to requirement in Little Bean’s eyes. She only needed one person yesterday and that was Nanna. Nanna had to push the buggy, Nanna had to help her with dinner, Nanna had to give her a bath, Nanna had to put her to bed! 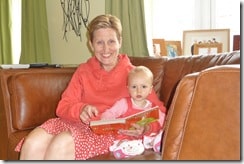 Little Bean and Nanna
I love to see how excited she is when she sees her Grandparents, it reminds me so much of how magical my Nanna and Grandad were to me. “Brandad” reminds me often of my own Grandad and I feel honoured that Little Bean has someone as special in her life. I truly hope that she will have all of them around for many years to come, they will enrich her life in ways that no other person ever could. I don’t know what it is about Grandparents, but, they really are magical!
What do you remember about your Grandparents? Do you have any special memories??
Note: all photos are old quite old because Little Bean refuses to sit for pictures with anyone at the moment!! And I don’t currently have any photos of me with my Nanna and Grandad because they are all packed up to move to the new house!!