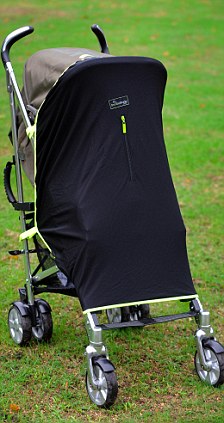 Did you make the same mistake that I did? When I was pregnant with Little Bean I read heaps of parenting books which suggested that nap times should be taken in a darkened room to help them distinguish between day and night. I followed this advice to a “t” and always put Little Bean down to sleep in an almost “black” room. This worked a treat with teaching her day and night, she slept through from 8 weeks and we have never had a sleepless night with her since, apart from the odd night when she has been ill. The problem that this caused for us was when out and about, she wouldn’t sleep because it was simply too light for her. We have travelled for 6 hours in the car and still she would not sleep, instead she would just get crankier and crankier.
Wherever I went I would carry a large blanket which I would tie over the pushchair to try to darken it for her, most of the time this worked but sometimes she would pull the blanket down with her feet and a battle would begin. I would put the blanket on, she would pull it off and before you know it the tears and the screaming would start (hers mostly, sometimes mine).
When I visited the Baby Show last year I stumbled across the Snoozeshade stand and got talking to Cara who I had been tweeting with on Twitter. At this point, my life changed for the better. I made the very clever decision to purchase a Snoozeshade and immediately put it to work. Within 5 minutes of fitting the Snoozeshade to Little Bean’s pushchair, the magic had happened – she was asleep! We still had the reluctant strop but with the Snoozeshade she was not able to pull it off and being so tired she gave up and went to sleep.
Since owning a Snoozeshade I have used it on a Graco TSB Tour Deluxe, a Petite Star Zia, a Maclaren Twin Techno (one seat only), the Phil & Teds Sport Double (front and rear seats) and the Quinny Zapp Xtra. It is so versatile you can use it on lots of different pushchairs and in many different ways, I love the ‘sneak-a-peak’ zip, it means that you can check on little one without blasting them with light and waking them up. I have even used mine in place of a rain cover when I forgot to take mine out with me.

Cara Sayer came up with the idea of the Snoozeshade whilst out to lunch with some friends and their babies. They were all struggling to get their babies to sleep, putting makeshift covers over the buggies when Cara decided something needed to change. She went away and set to work on designing the Snoozeshade. Cara took the Snoozeshade to a baby product show in London where it really took off. She was contacted by retailers JoJoMaman Bebe, Mothercare and Kiddicare who wanted to sell them. Now it is available to buy in Halfords, Boots, Amazon and John Lewis. Cara has recently had a trip stateside to introduce them to her fabulous product so I think there will be much more to come from this fab Mumpreneur – watch this space . . . .
For more information on Cara and her Snoozeshade click here.
Disclaimer: This is not a sponsored post.