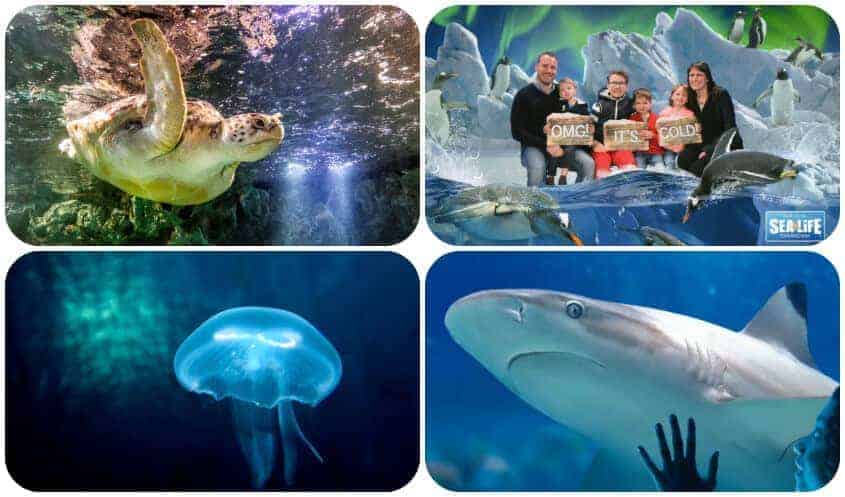 Explore the Ancient Oceans with Sea Life Centres this Half Term

This year Sea Life Centres are celebrating their 20th Anniversary and I am still loving visiting as much today as I did all those years ago when they first opened, only now I have the added fun of visiting with my Beans and seeing it through their eyes. Yesterday we were invited to visit Sea Life Birmingham, which is one of our favourites.

Sea Life Centres always get very busy but the trick is not to rush your visit, if you are happy to hang back a little you will get your chance to see the tanks and their occupants without a problem. The other great thing is that you can get your hand stamped when you leave so that you can return as many times as you like before the end of the day. We ALWAYS go back for a second visit once the crowds have died down a little towards the end of the afternoon. It’s also a chance to see any of the talks or feeding sessions that you may have missed earlier in the day.

In Sea Life Centres across the UK at the moment they are inviting families to explore our Ancient Oceans (6th to 21st February) through a range of activities, workshops and talks. At Sea Life Birmingham, Dr Dug will be there to oversee archaeological digs. Eager explorers will be invited to learn more about the history of the oceans and how the inhabitants of the deep have evolved over the 200 million years to be the amazing sea creatures we know and love today including sharks, turtles and jellyfish.

Our family favourite has to be the Giant Green Sea Turtle, known as Molokai (though Little Bean insisted she be called Shelly), did you know that Molokai was actually found in a lady’s handbag? We also have a particular fondness for the Gentoo penguin colony who never fails to provide entertainment. The Penguin Ice Adventure exhibit is one of the best I have seen, with its long swimming pool you can really see the speed at which the penguins dive, swim and jump out of the water.

Beanie Boy spotted the Nurse Sharks and Black Tip Reed Sharks whilst we were walking through the Ocean Tunnel, he thought they had broken fins until we pointed out they had black tips so in certain light it looked like they were missing. He felt much happier knowing they weren’t broken. Little Bean also really likes the eels (each to their own) and searched for them everywhere we went – a fun game of hiding and seek.

We were lucky enough to spot the Octopus who was feeling a little less shy early in the morning, it was a great opportunity to see her suckers on the glass and marvel at her size. The last time I saw a real octopus was on the beach in Majorca when a fisherman caught on his line. It wasn’t much bigger than his hand but his suckers were really strong, you could hear them as he peeled the Octopus from his hand.

We also saw lots of species of rays including the Bowmouth Guitarfish Shark, which is a rare species that can grow to reach an incredible nine feet in length. I could stand in the Ocean Tunnel all day long watching the first swimming and interacting (or ignoring) each other, it’s so peaceful and calming. Plus it’s a far cry from my tiny 8-litre tropical fish tank at home!

At this event our visitors will learn about the history of the oceans and how its creatures have managed to outlive dinosaurs and survive ice ages. They will also learn the sad truth about how these fascinating creatures now face some of their worst threats ever, as a result of over-fishing and pollution of our waterways and oceans”.

Seal Life Centres always have a great way of interacting with the children and encouraging their enthusiasm with fun stations along the route to get them thinking about what they have seen and learnt so far on their journey. As part of their Dinosaur Detective training, they had to try their hand at an archaeological dig, searching for fossils in the sand by carefully brushing the sand out of the way and using magnifying glasses to inspect their finds.

Curly, Jelly Bean and I stopped off in the Sea Life cinema to watch the 4D experience 20,000 leagues under the sea. I thought that Jelly Bean might have been frightened but he really enjoyed the 12-minute movie and even said that the boy was naughty for throwing his empty bottle into the sea (pleased to see my nagging about rubbish has paid off). I even learnt that 20,000 leagues under the sea refer to the distance travelled whilst under the water and not to the depth of the water.

I love that each time I visit a Sea Life Centre I see something different, there are so many different species of fish living in the sea, so many different shapes, sizes, colours and personalities. I still can’t look in a tank without creating some sort of dialogue for the fish swimming around.

What do you most look forward to seeing on your visits?

DISCLAIMER: Our tickets were gifted.