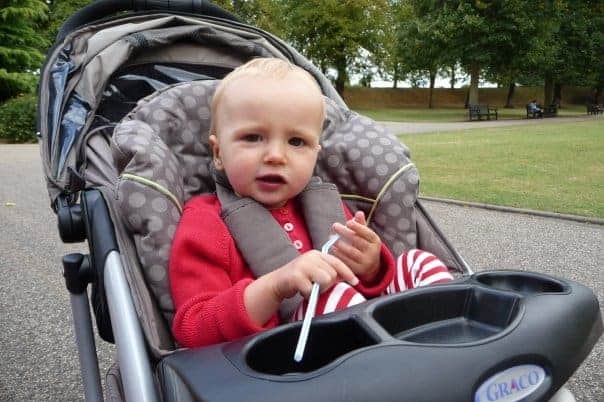 The one where Lillie goes through the hatch

I’ve always known that Lillie was a determined little tike and that I would have my hands full. Even when she was still a moving bump in my tummy we used to have our battles. She would stick her knee or elbow out of my sides and I would gently push back, did she give in? Did she heck, she’d just do it again twice as hard!

But getting back to it – last week Lillie went to her Nanny & Grandad’s for her “special time” with them and as usual, when she got hungry she took Nanny to her highchair and tapped it to say that she was hungry.

Nanny sat her in her chair and offered her some tea but by this time something else had caught her eye. From the heightened position of her high chair, she was able to get a good view of the birthday cake which was waiting for her Auntie Em who was due around later.

Nanny told Lillie that she couldn’t have any cake just yet but she wasn’t going to take “no” for an answer. Since she totally refused her tea, Nanny got her down and told her to come back into the lounge but she wouldn’t! Very stubborn is Lillie (just like her Mummy!).

After requesting a few times, Nanny gave up and turned the lights off in the kitchen – but again this didn’t bother Lillie, next Nanny tried closing the door and saying bye-bye – but still, it didn’t bother her. After a minute Nanny opened the door again to see Lillie trying to reach up to the worktop to get to the cake. “Little tinker,” thought Nanny (or words to that effect!).

So Nanny removed Lillie from the kitchen and took her back into the lounge to play but after a few minutes, Lillie picked herself up and made her way through to the dining room where she promptly climbed up onto the footstool and tried to climb through the serving hatch into the kitchen to the awaiting birthday cake!

You’ve got to admire her really, she sees what she wants and she goes for it, but I think I’m going to need eyes in the back of my head with this one! The really funny thing about this little tale, when offered birthday cake later in the evening – she said “NO!”.