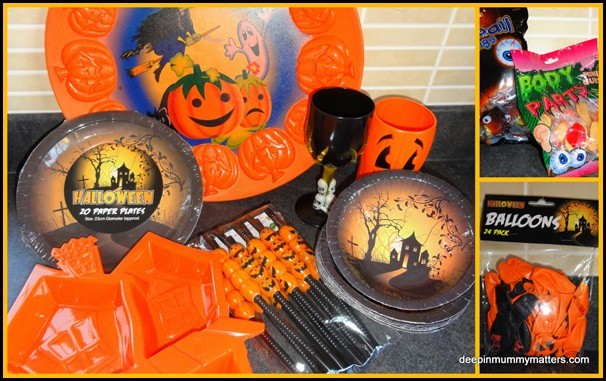 Do you do Halloween? I have to admit I’m not big on taking the children out ‘Trick or Treating’ although last year they did walk around our neighbours who had a pumpkin outside as we figured that meant they were ‘open’ to Halloween visitors. It’s that fine line between not spoiling the children’s fun when everyone else they know is doing it and not begging, which is basically how I normally see Trick or Treating. We have never explained the ‘trick’ side of things to them and the day they want to do that is the day that I will stop them from going. For the time being it’s an opportunity for them to dress up silly and do something with Daddy.

The thing that I do like to do for Halloween though is have a party so the children get to have some fun with their friends and hey, why shouldn’t the adults have some fun too. Last year we had a party for all our neighbours and their children and it was great fun. The only proviso was that EVERYONE had to dress up and it was so nice that everyone got stuck in and played the part.

Halloween is fast approaching us to it’s time to start thinking about this year’s celebrations and find those all important props to make the party really stand out. These are a few of the things that we have found so far;

Halloween Party food just wouldn’t look right served up on your Nan’s best china now would it? No way, you need spooky receptacles and pumpkin platters so where do you go to find such things? Poundworld that’s where! There are lots of different designs to choose from and at a price that won’t break the bank. It’s all about the fun factor and the kids will love these! 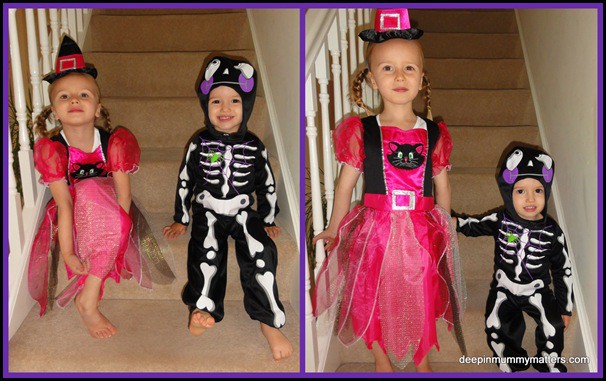 Like I said, when we had our party last year the only proviso was that EVERYONE had to be in fancy dress. I’m not too sure how I’m going to pull that off this year with the Jelly Bean Baby Bump but I shall see what I can come up with. Last year Little Bean did wear a witches dress for all of about 15 minutes but then she asked if she could get changed because she didn’t want to wear a black dress, she wanted to be in pink so this year I have planned ahead and have this oh-so-cute PINK Witches outfit which she loves!!

Unfortunately due to the dreaded whooping cough which has meant we are still not able to see Curly yet – and it’s his birthday on Monday 🙁  – I haven’t been able to get him to try his new Halloween outfit on but I just know that he is going to love it, it looks something like one of the scary creatures that he loves to draw.

For Beanie Boy he gets to do ‘real’ dressing up this year as last year he was so small he just came as a pumpkin (but a very cute pumpkin at that). This year I have chosen him a Cutie Infant Skeleton costume because it doesn’t have a face mask. He isn’t keen on having his face covered up but he loved the skeleton costume which Daddy wore last year so this year if Daddy wears the same, Beanie Boy can me a ‘mini-me’ of Daddy.

I have to say that I have been very impressed with the quality of the costumes, they are well made and the sizing is pretty accurate but the best part is they don’t feel like they will fall apart the second you put them on or make a move.

All of these costumes came from Joke.co.uk. There were sooooo many costumes to choose from, I found the hardest part was actually selecting them for each of the children. As far as prices go, there really are costumes to suit every budget with prices starting from as little as £2.99 rising to £274.99 for some very flamboyant couple’s costumes.

Who says your costume has to stop at the clothing? Many moons ago before having the children I used to wear different coloured contact lenses, not because I had anything wrong with my vision, I’m happy to say that I have never had to wear glasses or contact lenses but I chose to wear non-prescription ones just for a change of look. My favourites were a pale lilac colour, the electric blue or emerald green, sometimes I would wear a different colour in each eye just to see if people noticed.

I remember during my clubbing days (oh so long ago) there used to be a guy who always wore ‘freaky’ lenses in his eyes, sometimes he would wear ones which were completely white apart from the small black dot of his pupils, sometimes he would wear cat eyes, others he had looked like lightning bolts were coming from his pupils, nevertheless they always grabbed attention and I used to think they looked really cool. Since becoming a Mummy and getting all sensible, I had totally forgotten about coloured lenses until I received an email asking if I would be interested in reviewing a pair for Halloween from VisionDirect.co.uk to really make my costume stand out.

I have been sent a pair of Phantasee Lenses which are non-prescription, opaque lenses (this means they fully cover up my natural eye colour). They come in 64 different designs so there is something for every costume or event. Sadly I didn’t get to choose the contacts myself and these aren’t actually far removed from my natural eyes, I would have preferred something bright red, like these Dracula ones or the Volturi (hey I’m a Twilight fan!).

Back in the day (before I got sensible) I would have done something a bit more dramatic with my makeup to really accentuate the eyes but my makeup bag has dwindled somewhat to that of a Mummy – boy do I need to remember my age!!!