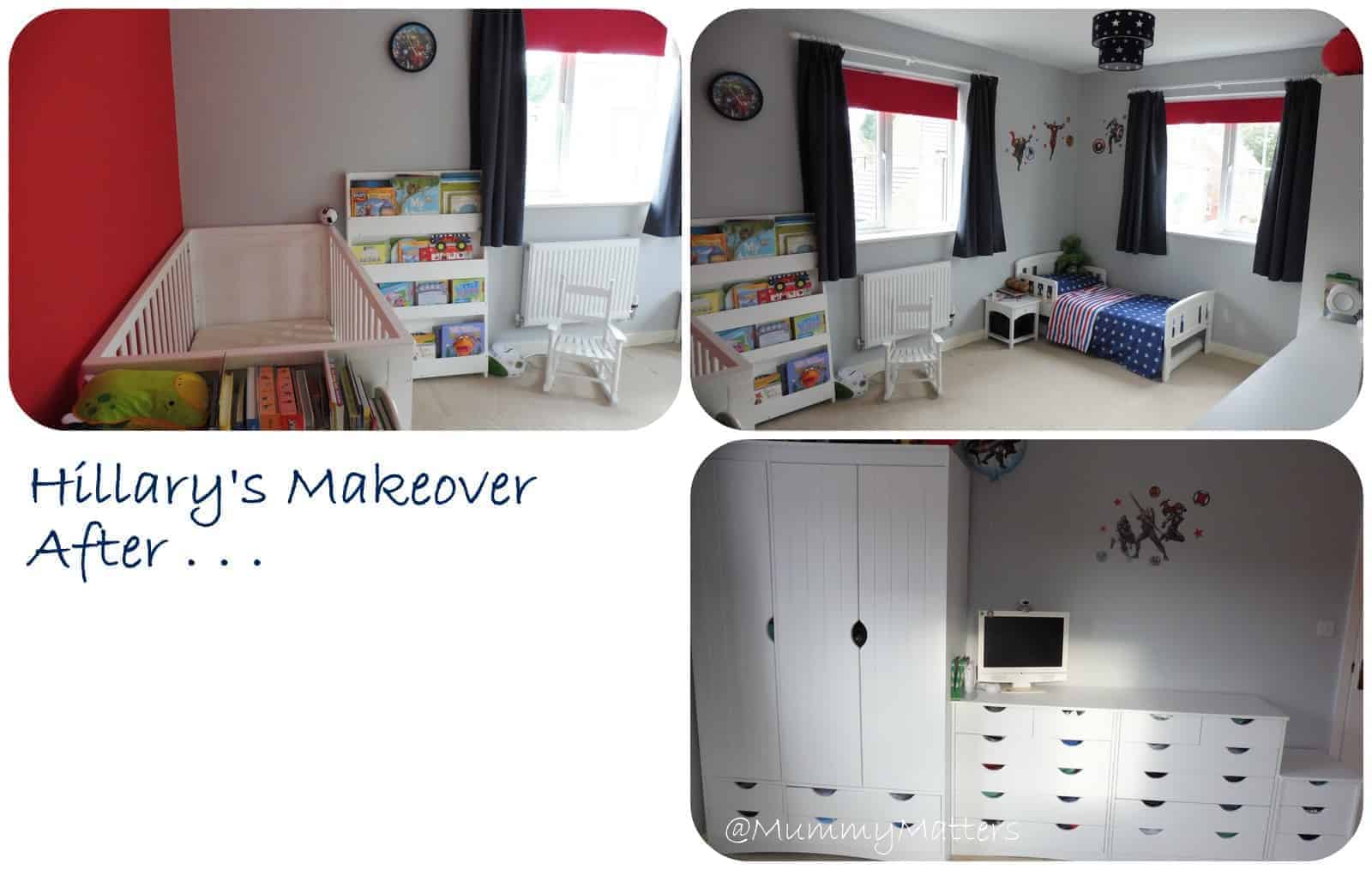 I knew the day would come when I had to say goodbye to all things ‘baby’ in the Mummy Matters household and with Jelly Bean hurtling towards his 3rd birthday in January, Hubby and I decided it was time to give the boys (Beanie Boy and Jelly Bean share a bedroom) a bedroom makeover. It was time to turn the ‘nursery’ into a big boy’s bedroom. We asked them what sort of theme they wanted for their room and they chose Marvel Avengers (well I think Beanie Boy did but Jelly Bean seems quite happy with it too). 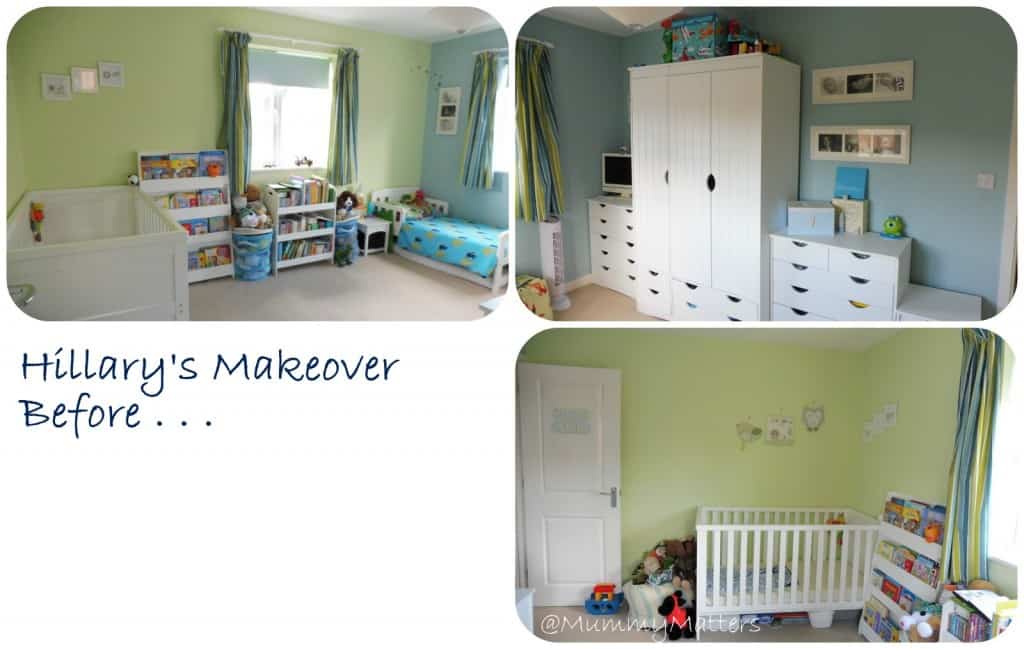 As if by magic I was contacted by Hillarys to see if I would like to work with them on a bedroom makeover project so I sent over photographs of the boys room so that Interior Designer, Joanna Thornhill, could send over her ideas and we would be given £100 towards the makeover.

1. I’m informed by my partner (who is 35 going on 3!) that next year, the new Captain America: Civil War film is coming out, where Captain America goes head to head with Iron Man. Perhaps their two signature colours – crimson red and dark blue – could therefore inform the basis of the scheme, with grey acting as a balancing tone throughout?!

You could paint two opposite walls in these colours, with the other two in a light grey tone, and also have a little fun with the window treatments. You could do this by replacing the blinds in each window with one red and one blue, but opting for the same style of curtains for both windows (a simple stripe, perhaps) to keep things relatively united.

2. Captain America’s star motif, as seen on his chest plate and shield, could be introduced into the space – perhaps as stickers on the plain white furniture, as a pattern on bedlinen (see Great Little Trading Co ) or even by repurposing the little stars already on the walls. An oversized star motif rug on the floor would look great too – check out this one from Rockett St George.

3. The bed on the left hand side of the room seems the more obvious spot for the bunk bed – try looking for a design in a metallic grey, as a little nod to Tony Stark’s workshop.

4. You could also replace the ceiling light with something closer to a porthole-type design, to look a little like Iron Man’s ‘reactor’ chest light? A couple of bean bags, again in red and blue, would give them each somewhere to sit, as well as mirror the curves and circles within Tony’s home in Stark Tower.

5. Try involving your sons in the process, getting them to come up with their own ideas and explaining the relevance of each element to them, so hopefully they feel a sense of pride in the space once it’s complete (and hopefully to encourage them to keep it tidy!) Good luck! 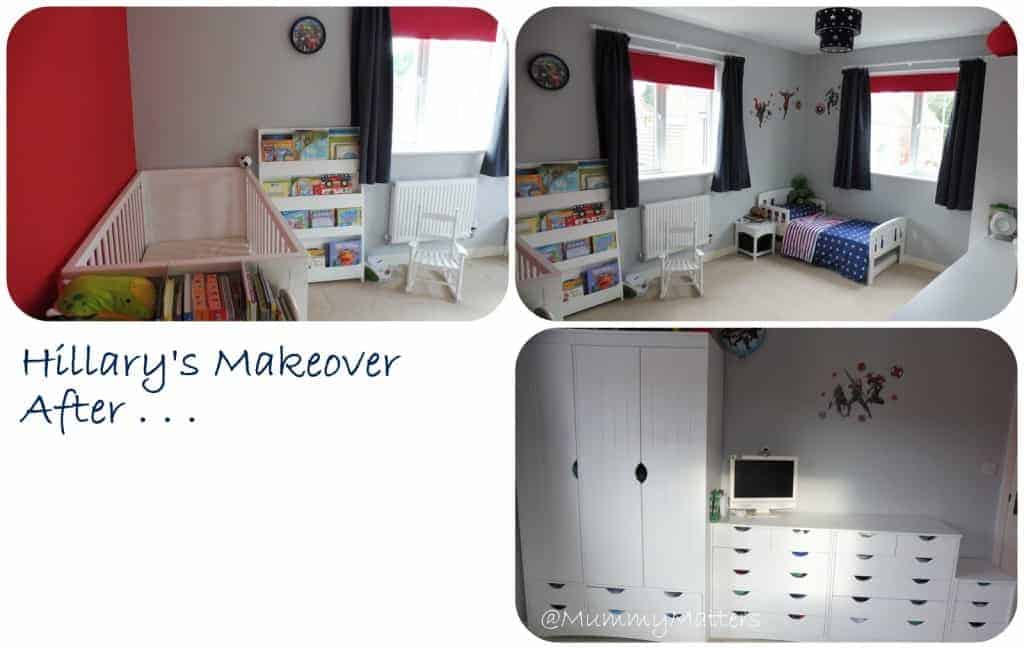 Over the following week I trawled the shops in search of the right pieces to accent the boys’ room, I bought the grey paint from Homebase, choosing the palest grey I could find. Luckily for the red wall we had half a pot of red paint left over from decorating Curly’s room which was just enough for the one wall. I purchased the curtains from B&Q and they are brilliant, a heavy fabric and they were fully lined, a steal at just £32 per pair. We were able to re-purpose the red blackout blinds from the kitchen as we had just bought new venetian blinds for there. I gave them a clean with a sponge and warm soapy water, they came up like new and because the boys’ bedroom is directly above the kitchen windows they are the same sizes so there was no need to resize. For their bedding I found the Twin pack of Stars and Stripes duvet sets from Asda which were perfect for the theme and at just £16 for the two a total bargain!! To complete the decor I purchased Walltastic Avengers Wall Stickers from Asda online and have placed them around the room, with the exception of The Hulk at the moment as Jelly Bean is still a little unsure of him.

Our main plan of attack was to get the boys a bunk bed to maximise on floor space and whilst looking around online we spotted the Kelly Single Bunk Bed in White from Wayfair and it was exactly what we were looking for. We wanted something which had storage space for both boys and enabled them both to have their own space, particularly Beanie Boy who would be in the top bunk. We wanted to be sure that he could have access to a drink and his nightlight in bed without having to get down or to put a shelf on the wall. 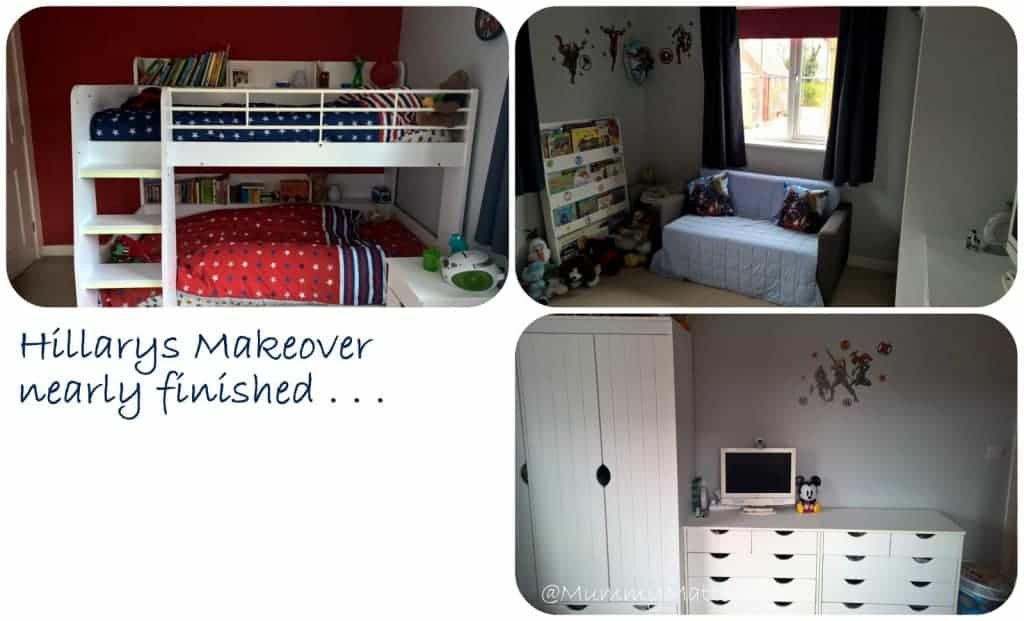 The bed arrived and took a good few hours to build, it wasn’t the most simple but when it was finished it certainly looked the part. It was much bigger than we anticipated so I guess we should have done our measurements first but thankfully the boys have a large bedroom so it could easily take it. I have noticed that some bunk beds can be a little wobbly in their construction but with the Kelly Single Bunk Bed there is no worry at all, it is very sturdy and gives the boys a full-size single bed each with ample storage for books, toys, a nightlight and refreshments. They each have their own ‘space’ in a shared room which is lovely. The proof, as they say, is in the pudding and so it was the boys were going to have the final say on whether this was a good bed or not and they LOVE it, they have been in their new bed for nearly a month now and they still tell us every morning and every night before they go to sleep “I love my new bed”. This is Jelly Bean’s first bed since being in a cot and I must admit I was a little worried about transferring him but it couldn’t have gone better, he can’t wait to get to bed in the evenings, he sleeps really well and with the help of the Dream Tubes we bought he doesn’t fall out of bed and looks super cosy snuggled up with his cuddly toys.

This weekend we moved the sofa bed out of the playroom and into the boys bedroom to give them somewhere to sit in their reading corner and to watch TV together whilst doubling up as a guest bed. Our next plan of attack for the boys bedroom is to replace their wardrobe and drawers with the Stuva storage systems from Ikea. Now that Jelly Bean is growing, we have found the double hanging space we have in their current wardrobe just isn’t working anymore so need something a little more functional for each boy. We have also seen a circular red rug in Ikea which we would like to put down on the floor to give it a cosier feel.

– See more at: http://www.hillarys.co.uk/bedroom-designs-before-and-after/#sthash.07lMjxRV.dpuf
DISCLAIMER: We were given £100 towards the redecoration costs by Hillarys and the Kelly Single Bunk Bed was discounted for us by Wayfair in exchange for our honest opinion. All words, images and opinions are my own and may not be copied without my permission.
bedroomdecoratingDIYgrowing uphome improvementsinterior design