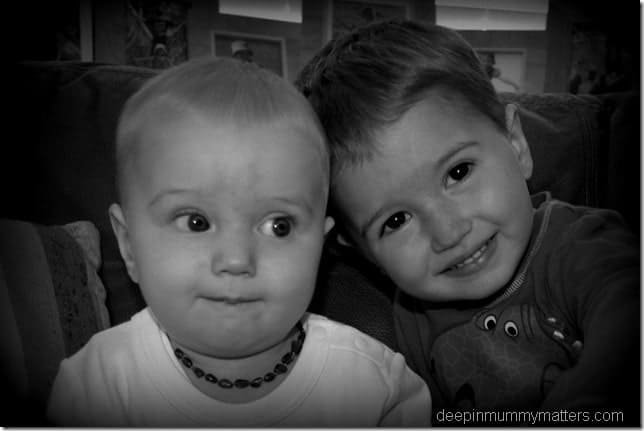 How cute are this big-eyed duo?! Really cute, that’s how cute. But today, they don’t look like this, they look heavy-eyed, a bit pale and they have very snotty noses, a horrible cough and a raging temperature. For the last week or so I have been struggling with a horrid cold and now it would appear that I have passed on my yucky germs to my poorly boys, although they have both developed a really nasty cough too. I took them to the Docs this morning who said that they are fine, no poorly chests or anything so I just need to keep up with the Calpol/Calprofen to control their temperatures and help them to feel better.

This isn’t helped by the fact that Jelly Bean has been waking up every morning somewhere between 5.10am and 5.45am which is very unlike him and in all honesty, I wouldn’t mind if it wasn’t for the fact that he is so vocal when he wakes up at that time. He shares a bedroom with Beanie Boy who likes his sleep but once awake, doesn’t go back to sleep so he is getting more and more tired each day. Little Bean sleeps at the opposite end of the house but even she is being woken up by Jelly Bean’s morning wake-up call. The effects are there for all to see, my usually chirpy young lady is visibly tired and irritable, in fact, we’re all getting pretty tired and irritable. We have tried dream feeds, we have tried no dream-feeds, I have tried feeding him the moment he stirs in the hope he will go back to sleep and I have tried ignoring him but he just gets louder and louder. This morning was the first time that I managed to get him back to sleep but that wasn’t until nearly 7am after being up since 5.10am. I am really hoping the bugs go away soon and that this new ‘routine’ isn’t here to stay???