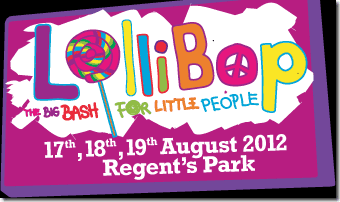 LolliBop 2012 tickets went on sale today (Thursday, 22 March) for a super early bird price of £19.50pp. There are a limited number of tickets available at this special price for the family event, which is returning to Regent’s Park, August 17-19.

LolliBop are delighted to announce Halfords as an official partner for the 2012 event. Halfords will create a bespoke Bike City at LolliBop, which will include a Wacky Races obstacle course for under 5s, where children can be the first to try out a brand new range of Balance and Apollo kids Bikes. LolliBopper’s will be the first in the country to ride the new bikes, which are available to buy exclusively at Halfords from September. For big brothers and sisters highlights include a BMX stunt display and demo area.

Pint sized guests (and grown ups) will notice a few more additions to the 2012 event.

The ‘LolliBop Kitchen‘ will bring an exciting new area to the event, where LolliBoppers will have the chance to learn new skills from live demonstrations and interactive workshops. A new ’Tween‘ area will play host a number of activities including street dance, hula hoop, and beatbox workshops, and even it’s very own laser room!

Other new areas include ‘The LolliBop Human Zoo’, ‘The Disco Shed‘, and the ‘The Village Green‘ (with its own live music, craft stalls, and street theatre).

Back by popular demand, the Science Museum are preparing for a triumphant return to Regent’s Park with an expanded area and dedicated Science Zone.

For pre-schoolers, the ‘3 ft & Under’ area is back. Confirmed activities include a mini disco, tiny play, little arts, yoga, teddy bears picnic and baby salsa. An extended covered buggy park is also being created.

Old favourites, including ‘LolliSports‘, ‘Imagination Stations‘, ‘Itsy Bitsy Strictly‘ and ‘The Enchanted Forest‘ will all return for 2012.

And of course no festival would be complete with a live stage. ‘LolliBop Live’ will play host to some of the hottest names in kids entertainment, with some surprises for adults to. Headliners to be announced soon.