5th April 2010 saw the start of a new music show on CBeebies aimed at the under sixes.  It features four primate “puppets” named Zac, Tang, Panzee and Drum who all live on a tropical island with Todd (the father figure Baboon), Auntie Dot, The Beach Byrds, DJ Loose and the Moaning Stones.  The inhabitants of the island get together to make music covering every genre from Rock to Orchestra.  Every day the primates are mentored by DJ Loose to perform in The Big Zing.  During the show a coconut clock counts down the time until The Big Zing and splits the show in four parts.  Each episode sees the Zingzillas discover a musical guest in a “glade” in the jungle – they then take inspiration from their guests and incorporate them into their performance at the Big Zing. 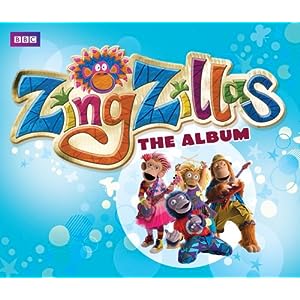 In our house, we don’t watch any TV programme religiously because we like to be out and about doing things but this is one programme which has really captured Little Bean’s attention.  She loves music and dancing, she particularly loves Panzee, the feminine chimpanzee who loves dressing up – she’s sensitive, fun and always happy to try something new!!

Last week, Monday 4th October The Zingzillas Album was released and we were lucky enough to be sent a copy to review.  When Little Bean saw the CD she jumped and squealed her way around the kitchen – off to a good start I thought!  I put the CD into my stereo in the kitchen and watched Little Bean carefully for her reaction.  The Album features 26 songs from Series 1, all written, produced and mixed by Banks and Wag.  Number 1 on the album is Zingzillas Theme – a clever move I thought as straight away she knew what she was listening to.  Her feet started moving, her arms started waving and Little Bean was dancing and attempting to sing her way around the kitchen.  Her other favourites are Boogie Woogie Bubbly Time, Do You Didgeridoo, Bhangra Beat and Rocking In A Rock Band.  I wasn’t at all surprised by how much Little Bean loved the CD, she has always liked listening to music but I particularly like this one because it introduces her to so many different types of music that ordinarily we might not have bought ourselves.

The CD can be bought from most supermarkets, online music stores and high street music shops at a RRP £8.95 which would make it a fantastic gift for any little “groovers” you might know.

Series 2 of the popular show starts broadcasting on 18th October 2010.