May 8 By: Sabina Green 0 Comments

I love attending some of the fab blog events that we are lucky enough to be invited to, my children have been down to London (as that’s where the majority of them are held) more times than I can even begin to remember.

For the past few months we have been enjoying many an afternoon or evening snuggled up with a DVD and goodies thanks to Warner Brothers who have been sending us parcels of DVD’s to celebrate different events through the calendar year including Valentines, The Oscars, Easter and the release of Happy Feet Two. A few weeks ago, Beanie Boy and I travelled down to London to meet the team behind Warner Bros and to see what exciting technology is out there to make our viewing experience that little bit more special.

I have always prided myself with being quite ‘up there’ with technology but it would appear that since becoming a parent I have got a little behind and I am no longer as “with it” as I thought I was.

It was only a month or so ago that I realised I could watch BBC iPlayer on my Wii console, so that just goes to show how out of date I am. I also didn’t know (until I went to Warner Bros) that you could watch films and listen to music streamed online or downloaded through your Playstation 3 and Xbox. As they say, you learn something new every day!

One sign which caught my eye was for Blinkbox. I had recently received an email from Blinkbox telling me that I had an online movie waiting for me. Being a little suspicious of any emails which come through suggesting I click on a link, I decided that my best option was to delete the email and so I did. It turns out that when I purchased a DVD at Tesco, my Clubcard registered the details with Blinkbox and that was why I received an email to say that I also had a free online copy of the DVD to watch at home or on the move with my laptop, iPad or Smartphone – how cool is that! Needless to say I swiftly retrieved the email from my trash when I got home!

Aside from the online copies of physical DVD’s you have bought blinkbox also gives you the latest release blockbuster movies at the same day as the DVD is released so no more having to get down to your local shop, you can be watching it whilst others are still stood in the queue waiting to pay! There are over 10,000 titles from movies and TV  which is 10 times the size of Netflix UK’s catalogue and twice the amount available through LOVEFILM instant. There is no subscription, you just pay for the things you want to watch – kind of pay as you go!

Blinkbox is also available on PC, games consoles (as mentioned above), tablet and Smart TV so there’s no excuse to not be a part of the blinkbox revolution!!!

KNOWHOW Movies is another great online movie shop with no subscription or late fees, just pay for what you watch. You need to register to use the service but once you’re in, you’re ready to go and as with blinkbox you can own or rent the latest movies the same day they are released on DVD or Blu-Ray. Movies can be downloaded to your laptop or PC, or streamed directly to your computer. If you prefer to watch your films in HD, fear not KNOWHOW have got it covered as they are the only UK service through which you can download films to your PC in Full HD (to PC’s with a 2nd gen Intel Core processor).

KNOWHOW also have an easy to understand age-rating guide and full parental settings so that you can be safe in the knowledge that your children can’t watch something they shouldn’t be.

KNOWHOW MOVIES will soon be launching on compatible smartphones, tablets, Smart TV’s, blu-ray players and games consoles, look out for the announcement later this year!

Whilst perusing the DVD’s in the shops you may have noticed a new breed called Blu-Ray Triple Play which are a genius idea. Blu-Ray Triple play packs contain everything to ensure that you can enjoy your movies anytime, anyplace, anywhere and on any platform. The box contains a Blu-Ray disc, a DVD and an UltraViolet Digital Copy. Blu-Ray and DVD have been around long enough that they need little introduction but Ultra Violet Digital Copy means that you can watch your new movie on your laptop, Smart Phone and Tablet on the go – the choice is completely yours. Every movie which you buy that contains an Ultra Violet copy is automatically stored in a free, online personal library so it’s always there when you need it. You just need to set up your free account to start watching.

I personally don’t know very much about the Lego Batman game or any of the LEGO Games for that matter but I do know that Curly was so addicted to his LEGO Batman for the DS when he got it last year that he played it from start to finish in a matter of days, only coming up for air, food and water every couple of hours. He is a HUGE fan of anything LEGO and that does carry over to the computer games too. My Sister-in-Law is also a big fan of the LEGO games series so it’s not just for the kids (although tbh she is just a big kid herself!!). Well now the LEGO fans can start looking forward to the next LEGO Batman adventure due out summer 2012. The original game sold over 11milion units worldwide so I think it is fair to say that the sequel will be very much in demand. 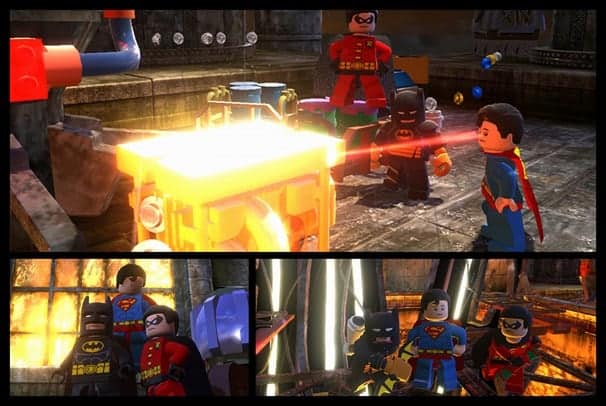 I watched the game being played and there are some really cool new features to the game as Batman and Robin return to join forces with other DC superheroes including Superman, Wonder Woman and Green Lantern to stop the notorious villains Lex Luthor and The Joker from destorying Gotham City. This time around the characters talk and have a great sense of humour which gives the game a different feel. There is a really cool ‘Changing Room’ which appears when Batman or Robin need specialist clothing and powers to help them to complete a level.

As you can see the year ahead is looking pretty exciting so get out there and enjoy it!

DISCLAIMER: I attended a Warner Bros Blogger Event and received a goody bag in connection with this post. All words and opinions are my own and may not be copied without my permission.