The week before Little Bean started primary school we were invited to a special screening of the new Thomas & Friends DVD Blue Mountain Mystery The Movie. I wasn’t sure how it would go down with Little Bean as she has never been a massive fan of Thomas but Beanie Boy is a boy’s boy and he loves all things trains, cars, trucks and diggers. It was held at the 4D Cinema at Drayton Manor Park (more about that in another post!) and was an experience which I think will stick with Little Bean and Beanie Boy for some time to come.

Thomas has been sent to work at the Blue Mountain Quarry and soon notices some strange goings on. He spots a little green engine called Luke who seems reluctant to speak to Thomas, whenever Thomas is around Luke runs away and hides. One day Thomas finally manages to get Luke to stop long enough to have a chat and finds out why he is behaving so strangely. Luke is worried about something which happened a long time ago, he thinks if the Fat Controller finds out he will be sent away from Sodor for good. Thomas does a little bit of investigative work and finds that Luke doesn’t need to be worried but Luke and some of the other engines take a little bit of convincing. Will Thomas be able to make Luke happy again?

I needn’t have worried about Little Bean enjoying the film at all as she loved it. Both Little Bean and Beanie Boy are very attuned to people’s emotions so they really got into that side of the movie, both telling us when an engine was happy or sad. Little Bean said at the end that she thought Thomas had been very kind to look after Luke when he was feeling sad and frightened. Sometimes I find it hard to believe she is only 4 years old, she seems much older than her years!

This was the first time that we had taken Little Bean and Beanie Boy to a 4D screening so they didn’t know what to expect but Hubby and I had a few ideas. Any time the little engines had a little bump, our seats would wobble and shake to mimic the action and twice during the film there was an incident with water so we got sprayed whilst sitting in our chairs. Little Bean was quick to realise what was going to happen the second time so she jumped out of her seat and ran to the end of the row so she didn’t get wet, whilst Beanie Boy pulled the hood up on his coat and turned to face my shoulder so he didn’t get so wet. I had to laugh when he was watching the DVD at home this week because when it reached the watery part of the DVD he jumped from his seat and ran out of the playroom. I asked him what he was doing and he said “not get wet, shut the door!”. It took me some time to explain to him that Mummy’s TV wasn’t quite as clever as the big one at the cinema and so he wouldn’t actually get wet!! 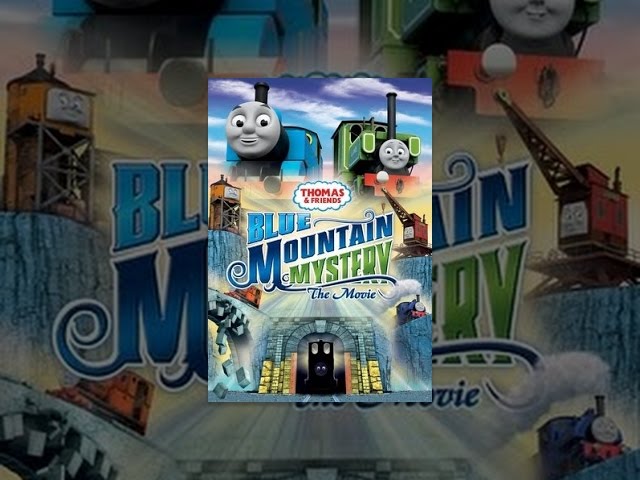 If you have a Thomas fan at home then the Blue Mountain Mystery would be a great addition to their DVD collection, Little Bean and Beanie Boy thoroughly enjoyed it and have asked to watch it often since we have been home. The DVD went on sale on 3rd September and there is a really fun interactive website which you can check out just click here.