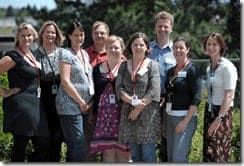 It’s a hot summers day, the birds are singing in the trees, there is a gentle breeze making the heat a little more bearable and I’m being driven (rather erratically) to Schwalbach in Frankfurt to meet the team behind the revolutionary new technology known as Dry Max. So where was I? Proctor & Gamble’s Pampers Research and Development Centre of course, who else could come up with such a gem of nappy?? We were taken right into the core of the facility to see the nappies coming off the production line and had access to their prototype lab where a team of men and women created the “test” nappies for their panel members to try out. They have been the market leaders since the 1960’s and continue to lead the way today. 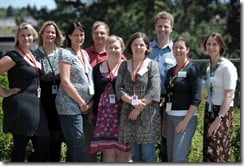 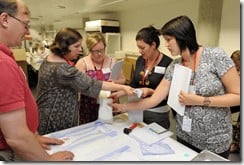 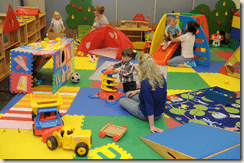 History
Victor Mills (1897-1997) invented Pampers – he developed the disposable nappy brand in 1961 after looking at better products to use for his baby grandson. He had worked as an engineer for Proctor & Gamble for 35 years after graduating from the University of Washington in 1926 with a degree in chemical engineering.

Pampers: Then and Now
In 1969 Pampers launched the new C-fold design which was available in 3 sizes, today their range is very extensive covering babies from pre-term through to toddlers and even so far as pre-schoolers. Each size and style of nappy has been carefully researched and adapted to meet the child’s needs.
Development
The “new baby” range is made from supersoft fabric so that it feels nice on babies skin and the velcro tabs are made to be as quiet as possible so as not to startle baby. Who would have thought they would even think about that? I was really surprised, though pleasantly at that!
How do Pampers know what a baby really needs? Surely they’re just a bunch of scientists/engineers in a laboratory brain-storming??? Not at all, at Schwalbach they have a dedicated team of experts who run a “Playground Lab” with 1,300 baby members for the P&G Panel. They are watched over periods of time whilst playing to monitor fit and leakage. Each week 1200 mothers collect “test” nappies for at-home tests and are then interviewed about the tests. From Schwalbach alone, 2.5 million nappies are distributed for test purposes.
What is the next generation of nappy?
It is the new “Dry Max” technology. This year Pampers have launched its super-thin nappy available in the Active Fit and New Baby ranges. I was amazed at just how thin this nappy really was and didn’t think it would be possible for baby to stay dry with something so thin. It looked like they had forgotten to put the “wadding” in but no, they hadn’t forgotten it – they had purposely left it out in favour of their new finding – the Super absorber. The best way that I can describe this in laymen’s terms, is think of the gel crystals that you put in a vase of water for your flowers. It’s a similar kind of thing to that – it is thousands of tiny crystals which absorb all the wetness but stays dry to the touch. The new nappy is Pamper’s driest ever with 20% less bulk which is great news for babies. The equivalent of 1 nappy per day less in weight! Would you want to wear a great big bulky pad all day, especially on hot summers days like we are lucky enough to have at the moment? Their clothes fit better, they can move around more easily, they are happier and so of course, us Mums and Dads are happier! Its a win-win situation!!

Left: Super Absorber Right: Paper Pulp
The new Pampers Active Fit nappy with Dry Max technology has received the Seal of Approval from Allergy UK – this is no mean feat! There are no toxins whatsoever, so the nappies are totally kind to babies skin.
Disposable versus Reusable Argument
Disposable nappies provide improved hygiene and convenience for home, hospital and nursery – they are the chosen nappy by 95% of parents because they are quick, clean and easy to use. They have also brought about a noticeable decline in cases of serious nappy rash.
In October 2008 The Environment Agency carried out a Lifecycle Assessment Study for Disposable and Reusable Nappies. View it here.
The report found that Reusable Nappies can have a higher or lower environmental impact than disposable nappies, dependant upon how they are laundered. Effects that will make the Reusable Nappies more environmentally friendly are:

Disposable nappies are biodegradable in every part other than the velcro tabs. Land fill sites do not want things placed in them which biodegrade quickly because they are trying to “fill” the land. A land fill site is lined, filled and then capped so that it slows down or stops the contents biodegrading. Of course, with the new Dry Max nappies being so much thinner than before there will be less volume of nappies being placed in the sites.
The Environment Agency’s report has shown that despite all the hype, disposable and reusable nappies actually have a very similar effect on the Environment so it is very much down to personal choice and what works for your family.