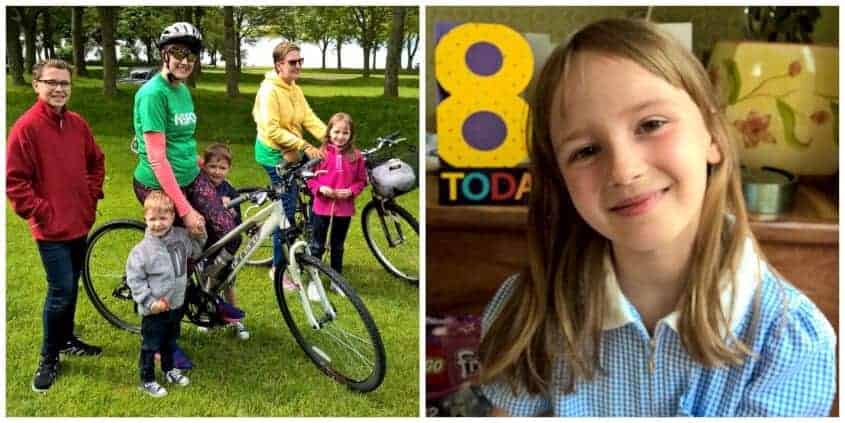 My Sunday morning started with butterflies in my tummy as the day had arrived for my Mum and I to go on our 17 mile bike ride around Rutland Water in aid of NSPCC. I was very much looking forward to it but also a little nervous as I was cycling with a sprained ankle but I’m pleased to say we made it around in one piece and my ankle served me very well. Parts of the ride were much tougher than I anticipated but the sun was shining brightly and my little family came along to support us at various points around the circuit.

In the afternoon we returned home for a little family gathering to celebrate Little Bean’s 8th Birthday. She was a very lucky girl and received some beautiful presents which she was very excited about and it wasn’t even her birthday yet! 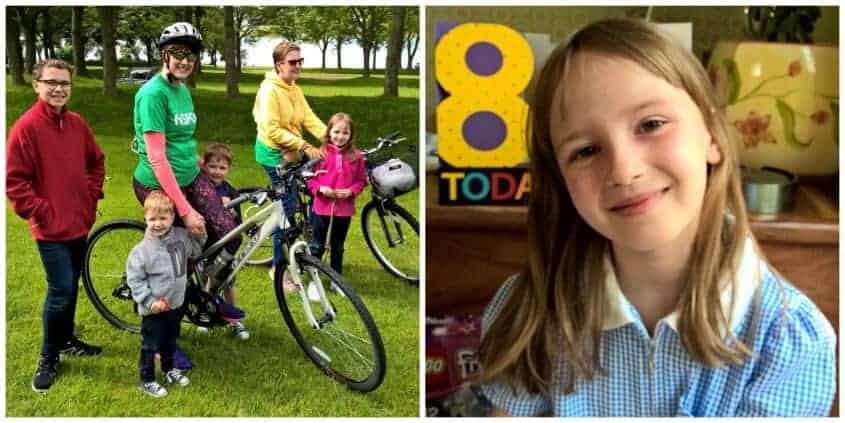 On Monday morning I awoke early so that we could wish Little Bean a Happy Birthday and so that she could open her presents. She was very excited to be spending the day at school on her birthday, up until now her birthday has fallen in the school holidays so this was her first ‘school birthday’ but Mummy messed up and forgot to buy her a badge!!!! I dropped her at school then had to make a mad dash to the gift shop to buy an ‘8’ badge and then drop it back to her at school.

After school Nanna came over to give her the rest of her presents and to celebrate with more birthday cake! Little Bean said she’d had the ‘best birthday ever’ – well you can’t ask for better than that now can you?!

Things had been going very well since the New Year with Jelly Bean and his bowel movements but for some strange reason he had begun withholding his poop again over the past week and was in lots of pain on Tuesday. I tried desperately to get him an appointment at the hospital to see his Consultant but they couldn’t fit him in until Thursday. He hadn’t eaten or drunk very much at all over the previous couple of days and then was sick in the morning. I kept him home from preschool for the day and gave him lots of tummy massages, water by syringe and eventually a suppository. He screamed lots throughout the day because he was in so much pain and when he wasn’t screaming he was laid on the lounge floor asking me to sit by him but not touch him. By 6pm he finally did the tiniest little poop but it was nowhere near enough to make the pain go away. He fell asleep early but I think that was down to exhaustion. 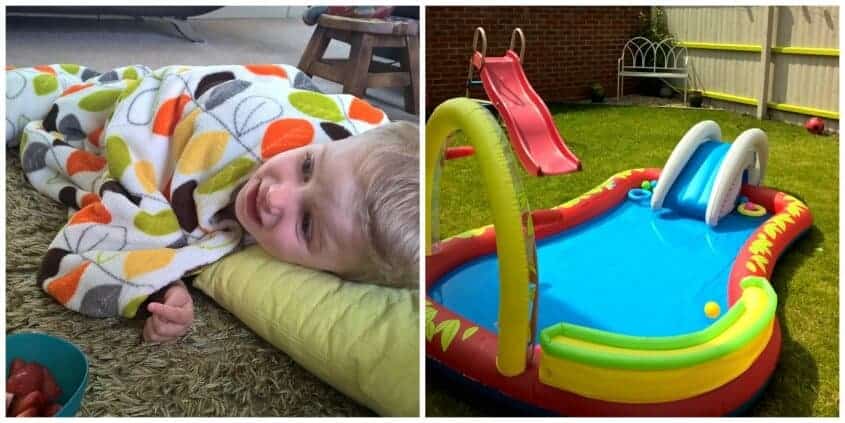 Jelly Bean awoke on Wednesday morning screaming out in pain again and I dreaded the day ahead of us. I asked if he wanted to go swimming and to my surprise he said yes, I thought it might help to take his mind off his tummy and it did. He relaxed and had fun in the water, then when we returned home his tummy started to hurt again finally he passed a reasonable sized poop. Perhaps this was the plug that we needed to get things moving? By bedtime, he began screaming again but this time he gave an almighty push and finally had a huge bowel movement which must have made him feel 10 times better. After school the Beans enjoyed some fun in the sunshine playing in their new paddling pool and I took the opportunity to sit in the sun and relax for 20 minutes before beginning the tea-time/bedtime routine.

Thursday morning I prepared myself for the fact he may not want to go to preschool again but he awoke early and had another large bowel movement then ate the biggest breakfast and drank two cups of squash. Finally, my boy was back and feeling better, he asked if he could go to preschool and had a great day there, even doing another really big poop. You’d be amazed how much poop can come out of a person so tiny!

Whilst Jelly Bean was at preschool I took the #BMW2SeriesGranTourer out for a spin to see what all the different functions did and decided to see whether I could get a decent amount of food shopping in the boot with 7 seats up AND a pushchair in the boot too. I was amazed when I managed to fit 3 bags of food shopping in the boot alongside my Maxi Cosi Noa pushchair. I never would have thought it possible – just goes to show that looks can be deceiving. 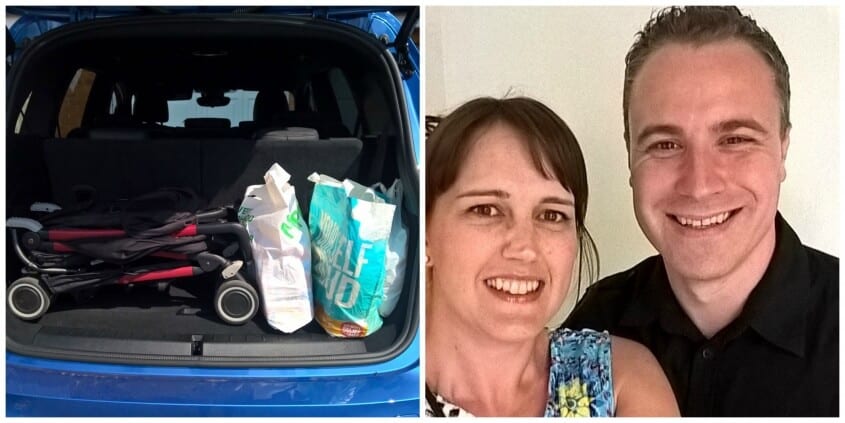 Friday night was ‘Date Night’ for Hubby and I. It had been our 9th Wedding Anniversary on Thursday but Hubby had been away with work so we had to wait until Friday to celebrate. We decided to stay local and went for our first taste of the Handmade Burger Co. in Queensgate Peterborough. The staff were so helpful and friendly, they made us feel very relaxed and comfortable from the moment we arrived. Handmade Burger Co. in Queensgate is like a rabbit warren with lots of little rooms coming off a central courtyard, very trendy and yet cosy at the same time. We ordered our food and quickly realised that we wouldn’t be able to finish it all as the portions are very generous but the food was delicious, we only wished we had space left for a dessert!! 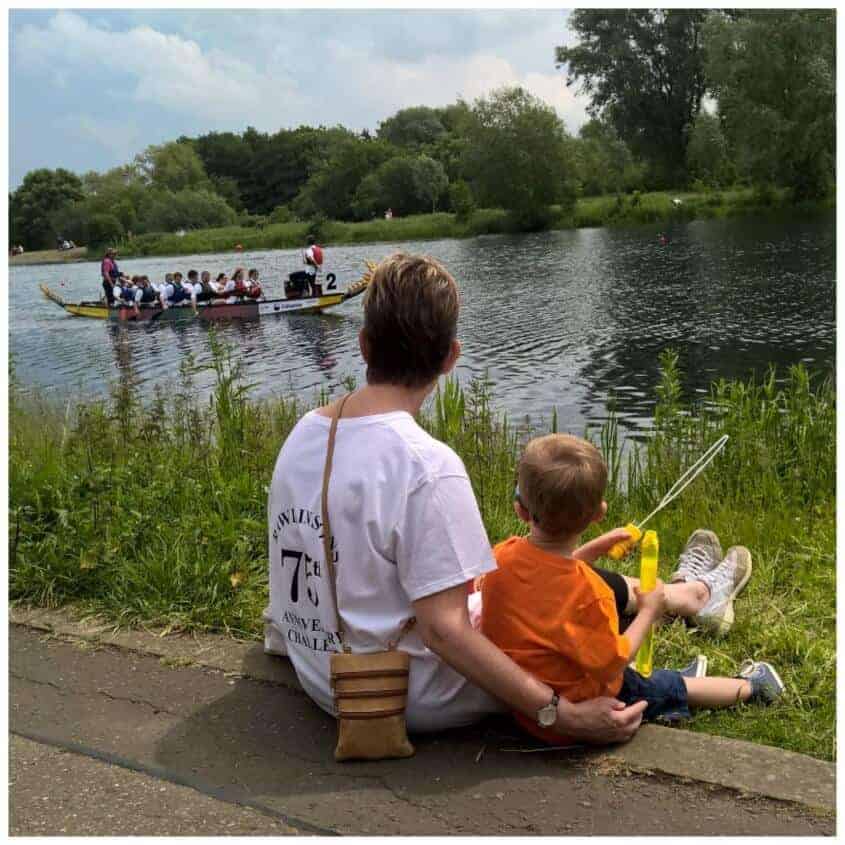 On Saturday morning we were out as a family again (minus Little Bean), this time support Nanna who was taking part in the Peterborough Dragon Boat Race along with her colleagues to raise money for Sue Ryder. I wasn’t quite sure why Nanna had put her name down as I didn’t have her down as a ‘boat’ person but she completed her race with her team and enjoyed it, although she did say ‘never again’. It was a really good turn out of support and teams, to my knowledge only one Dragon Boat capsized and the sun shone all day long so everyone had a great day. I decided that I must have been allergic to some of the trees nearby as I came out with the worst hayfever ever and Hubby even struggled to breathe at times??

Little Bean wasn’t with us for the day, she was out celebrating her birthday with her Godfather and had a lovely day being spoilt with shopping, lunch out at her favourite Pizza Express and a trip to the Peterborough Museum. Then in the evening, Little Bean and I had a sleepover at Nanna’s house for a girly pamper night over a DVD. It was the perfect end to her Birthday celebrations and we were all shattered!

How was your week?