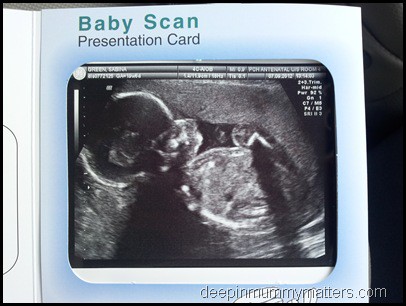 So you might have seen my post earlier today telling you that we were heading to the hospital today for our 20 week scan, I can’t believe how quickly this time has come and despite my determination from the beginning of the pregnancy that I was having a girl, my thoughts have been wavering for the last week as to whether or not I could actually be carrying a boy instead, so when I woke up this morning I had a nervous anticipation as to what the result would be. Hubby and I would be happy either way, we have already been blessed with our three beautiful children, we just wanted to be told that we were having a healthy baby. We were finding out the sex more for the children’s sake than our own. Unfortunately because of the time of the appointment Curly couldn’t be with us but we took Little Bean and Beanie Boy along.

Thankfully we didn’t have to wait too long before our turn came up and we were ushered into the Ultrasound Room ready for the scan to begin. Little Bean excitedly climbed onto the bed beside me and held my hand as the baby appeared on the screen. Beanie Boy took one look at the screen and said “Mummy look monkey” – honestly it doesn’t look that bad!!

Our first sight of baby was curled up on it’s tummy with it’s hand on the side of it’s face. The Sonographer took about 30 minutes thoroughly checking the baby over and I have to say it was probably the most agonizing 20 week scan we have ever had,  she was so thorough we kept thinking that something was wrong especially when she spent 10 minutes alone just looking at baby’s heart. She wasn’t happy with the way that baby was lying so I was sent off for a walk around the hospital to see if I could get them to move around.

A further 10 minutes later and I was back on the bed again with Little Bean curled by my side desperate to know who Mummy was carrying so once the Sonographer was happy that baby was healthy she asked the question “do you want to know the sex?”. A very excited Little Bean said “yes please I would like a sister” but Mummy had already spotted the bits and bobs so I knew what was coming as the Sonographer said “oh sorry sweetheart it’s a little boy”. Little Bean climbed up onto Daddy’s shoulder and cried “but I wanted a sister Daddy”. My heart broke for her as she was so upset but we told her that it meant she would always be special as she was our one and only Princess and that it would mean girlie days would be even more special as it would always be just me and her, no sharing Mummy with anyone else. She didn’t seem sold on the idea.

This evening she told Curly “we’re having another Brother” and then promptly burst into tears again. We are all really happy and I personally think a boy is the best fit for our family being close in age to Beanie Boy it will be nice to have the two boys at home whilst Curly and Little Bean are at school. Little Bean will always be our special girl and in time I am sure that she will see being the only girl has it’s benefits, at least they won’t be stealing her clothes and make-up (I hope!!).