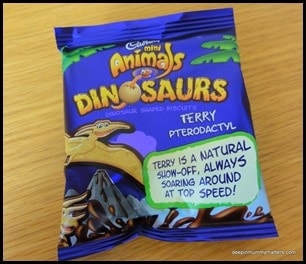 Look out there’s dinosaurs about . . . but they’re only chocolate!!

Shhhh don’t tell anyone, but as Hubby is sitting glued to the TV watching Jurassic Park for the zillionth time, I am munching my way through a bag of Cadbury Mini Animal Dinosaurs. I have a fear that this baby might actually come out covered in chocolate because I have to admit, that is my major craving so far, I am virtually dreaming of chocolate 24 hours a day whether I am awake or asleep, I guess there could be far worse cravings to have though so I’m not going to complain. Especially since we were sent a few bags of the yummy new Cadbury Mini Animal Dinosaurs.

I still remember begging and pleading with my Mum as a youngster (about 19, 20 years old) if we could have Cadbury Mini Animals because they are so flipping scrum-diddly-umtious! To appeal to a wider audience, dinosaurs have been added to the packet now too. In your pack be sure to look out for; Travis the T-Rex, Trudi the Triceratops, Terry the Pterodactyl, Spike the Stegosaurus, Daisy the Diplodocus and a further mystery dinosaur, maybe the Stan the Stygimoloch (this was Little Bean’s guess). Each dinosaur pack has dino facts on them so you have have a mini-history lesson with your biscuits!!! Who knew learning could be so much fun! 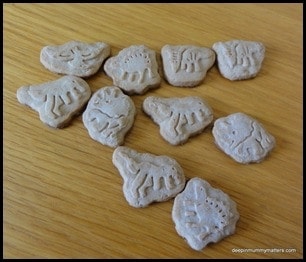 When we were sent the bags of Dinosaurs I think the idea was that I give them to the children, because they come in individually sealed snack packs they are perfect for my changing bag or for lunch boxes but I’m pregnant and I have needs too so I’m ashamed to say that I have been eating loads of them. Must dash now, I need to get to the shops and buy some more before the children realise they are all gone!

Available at all good supermarkets.

DISCLAIMER: I was sent these yummy biscuits for the purpose of this post and I’m not sorry that I ate them!!