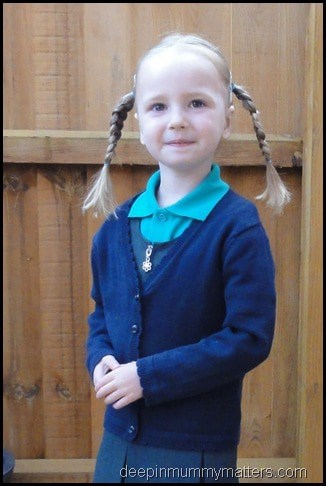 I remember when Little Bean was born that Hubby and I joked about how we would keep her locked up until she was 30 before letting her out into the big wide world and venturing into ‘first boyfriend’ territory.  Life with a daughter was definitely going to be different.

Contents hide
1 Starting School
2 Passport Day
3 A New ‘Friend’
4 Shall I tell you a secret?

When we made that joke I didn’t really contemplate that within just a few weeks of starting school she would be coming home telling me about her ‘new boyfriend’. I hoped that I would at least get the first year out of the way before that started.

A couple of week’s ago, Little Bean’s school had their first ‘Passport Day’ of the school year.

Apparently this is something they do a number of times throughout the school year. On Passport Day the different year groups are mixed up and each classroom becomes a Country from around the world.

On Little Bean’s first Passport Day she travelled all the way up to Year 1 which had been transformed into the USA. Little Bean learnt all about the USA and their customs, songs and flag. She got to put her handprint on the Walk of Fame as well as other activities. She came home that night full of enthusiasm, brimming over with stories of her day and the things she had learnt. She said that she wanted it to be Passport Day every day.

As she spoke of her day she told us about a new friend she had made by the name of A. She told us that A was a Year 1 Boy and that she had sat next to him all day. Every day after that when I collected her from school she would take me to the Year 1 classroom in the hope of finding A to show me.

Last Friday, we finally caught up with A in the playground and I had to giggle to myself as Little Bean sidled over to him. She called his name a couple of times and waved without him noticing her, so then she upped her efforts and began shouting his name and finally stood right in front of him and said: “come and meet my Mummy”. I don’t know who was more embarrassed, me or A. He politely said hello and quickly patted Little Bean on the back before saying goodbye to us both and then returning to play with his friends.

Shall I tell you a secret?

As we left the school gates Little Bean very casually said to me “shall I tell you a secret Mummy? He’s my first boyfriend!”. I didn’t want to embarrass her by teasing her, I want her to feel that she can talk to me about anything but I giggled inside.

I hate to say it but I think she is perhaps more likely to be his stalker than his girlfriend but I could be wrong, the one thing I do know is my little lady LOVES the boys so I have a feeling A could be the first in a long line of boyfriends/stalkees!!