I have a fear that our 2yo daughter, Little Bean, is a monster of our own making! Well not really a monster (though she can be sometimes) but what I’m actually talking about is her nightly bottle routine.

Legaljuice.com
To give you a bit of background, Little Bean was breastfed until 5 months, apart from the dream feed of the evening at 10.30pm when Daddy would give her a bottle of expressed breast milk. She didn’t wean well as she just didn’t seem interested in “proper” food and is only just getting to grips with big girl food now. Even that is a very limited diet!
My problem is that she is STILL having a 6oz bottle of growing up formula at bedtime (7ish) and then a bottle of goodnight formula at 10.30pm. This means that she isn’t always in the mood for breakfast in the morning and so the day begins! She has a 3oz bottle of cows milk at 10am for her morning nap, lunch around 12.30pm and generally a pretty good tea at 6pm. With baby boy due in 6 weeks, we’re really keen to knock this dream feed on the head as we will have our hands full sorting him out. And of course, we are both aware that her current dream feed is probably one of the reasons that she is still not eating well in the daytime.
babble.com
So my question to you is, how do we stop the dream feed? Do we just go cold turkey and hope for the best?? We have tried this a couple of times but when we aren’t in her bedroom by 11pm she wakes up shouting for milk and screams blue murder until the milk is presented to her?
I fear that we have got her into such a good routine that we are now struggling to break it but we know that it is something which needs doing. 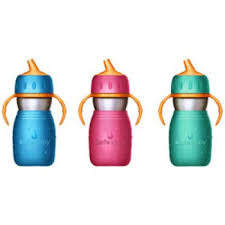 greatgreenbaby.com
Also, I fear that she is behind with her “cup” habits. She will happily drink juice from a spouted cup but will still only take milk from a bottle. I’ve tried on a number of occasions to get her to drink her juice from an open cup, which she finds amusing for the first couple of times but then we slide back into old habits and out comes the sippy cup again.
And then there’s the dummy! From the age of 12 months I stopped her having a dummy in the daytime other than for naps and car journeys (I needed the peace and quiet!) but I’m wondering if I should now be trying to stop her from having that altogether or am I trying to tackle too many things at once?

forbaby.com.au
Please leave me your comments, as I say our baby boy is due in 6 weeks and so I would ideally like to get Little Bean in a new-ish routine before he arrives. Oh and did I forget to mention, we are moving house in the next 2-3 weeks too!! Whoever said life was dull?