As you saw from my post on Monday we found out that Little Bean didn’t get the preferred Primary School that we would have liked for her. It’s pretty much all I have been thinking about this week, should we appeal, shouldn’t we appeal, I know that she will fit in anywhere . . . . and so it goes on. My worst moment came on Tuesday morning when I took her into pre-school and saw her keyworker C. C greeted me at the door and gave me a big hug. Before I knew it both of us were in tears and looking like a proper soppy pair. C had been told that two of her key children didn’t get a placement at the school attached to pre-school and so of course she was sad that she would have to say goodbye to them both for good. At least if they went to the school next door then she would still get to see them at School Club when they attended.

I have spoken to parents, teachers, the admissions department, the headmistress at the preferred primary school and basically anyone I can think of to get the best advice on what to do. Hubby and I have decided that we will appeal, we will only regret it if we don’t at least try. But we also need to think about what to do for Little Bean. Should we move her to the pre-school attached to her new school for the last term to help her to adjust or just leave it until she starts in September? Then someone suggested that I split her days for the last term and allow her to do a couple of days at each pre-school, that way she is slowly weaned off her current pre-school and friends and introduce herself to the new surroundings and children at her new school. I hadn’t actually realised that you could do this (obviously if there is space at both pre-schools) and I had known earlier because that might have made things much easier for us now. 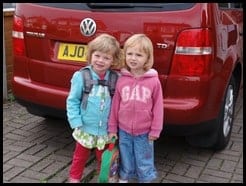 I decided yesterday to start planting the seeds with Little Bean about the possibility of her attending a different school as she is adamant that she is going to the one she already knows. As we were driving home I asked her how she felt about perhaps attending two pre-schools and maybe doing one day per week at the new pre-school and I reminded her of a few children who she already knows attend that school. Her response was “yeah wicked!! I might even get to meet some nice new boys and girls” and then she spotted a boy, probably aged about 6 or 7 walking away from the school and she said “look Mummy, he looks like a nice boy and he’s from that school isn’t he”. At that moment I felt really positive about it all, this was possible and my little girl would be fine, then she followed her comment up with “and Ella can come too can’t she Mummy because we always do everything together” and then my heart sank!