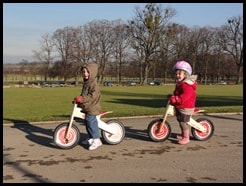 A Mixed Bag and a First!

Its been a funny couple of days, not funny ha ha, funny strange.

I caught up with a really good friend who I haven’t seen since before Christmas, had a good old bitch moan chat and generally put the world to rights.  I love getting together with her, we hadn’t seen each other for years and met up again about 18 months ago and we get on like a house on fire, I look forward to our times together, but due to our family commitments they aren’t as regular as we would both like.

Friday was a particularly shitty bad day as someone very close to me had some bad news and I hate to see them down, especially when there is nothing that I can do to make it better.  I can’t discuss who or what has happened but what I can say is I’m so angry at the way they have been treated, sometimes people deserve a break, and this person is one of them!

We did have a nice couple of hours with Cafebebe and Little Miss at Burghley House, the girls had a play on their First Bikes but Little Bean was too cold because she refused to wear her hat, scarf and gloves so she got impossible grumpy very quickly and started crying.  Once I had managed to get her calmed down and installed in the Phil & Teds we had a really nice walk and lunch out.  All that fresh air knocked both children out so I had quite a peaceful afternoon.

Over the weekend, we had a lovely relaxing couple of days at home.  We did all the boring necessary stuff like cleaning the house, changing the beds, we got all our crap unused treasures listed on ebay and food shopping done, but aside from that we played games, did puzzles, played with the playdoh and played on the Wii.  We even managed a drink at our local which is a very rare occurrence for us.  Every weekend we charge around like mad things, driving here, there and everywhere – it was nice to actually just stay at home and be together, the weekend felt so much longer.  Little Bean has been nagging asking my Mum for weeks if she could go for a sleepover at Nanna’s and on Saturday night she got her wish.  She was sooo excited, I love to see her face as the car pulls away, its almost as if she’s won the golden ticket to visit Willy Wonka’s Chocolate Factory.  I just hate it when I go to bed at night, it feels wrong walking past her bedroom without popping in to give her a last goodnight kiss.

Today my friend was supposed to visit with her son, but unfortunately he was rushed to Hospital on Friday afternoon (I told you it was a shitty bad day).  My friend and I went through our pregnancies together, were due on the same day, both went nearly two weeks overdue and ended up giving birth 23 hours apart.  I feel a great fondness for her little man and hate to think of him poorly.  He’d had a febrile convulsion whilst taking a nap due to a fast rise in his temperature.  Can you imagine how frightening that must have been for her.  All Friday evening I felt particularly protective over my babies, especially Beanie Boy as he’d been suffering from a cold for the last few days.  I kept checking his temperature to be on the safe side.

As I now had a day with no plans I took the bull by the horns and phoned around a couple of the nurseries to find Little Bean a place.  She starts next week and not a moment too soon.  She is more than ready for it, I think she needs more stimulation than I can give her now that Beanie Boy has come along.  Bless her, I try my hardest to keep her entertained but Beanie Boy demands a lot of my attention right now, especially with the weaning, so she inevitably gets left to her own devices.  She has been such a good girl since Beanie Boy has come into our lives, not once has she complained that she hasn’t been getting the same attention.  All she wants to do is kiss, cuddle and play with Beanie Boy – she’s a wonderful big sister and I love her so much for it.

This afternoon whilst Little Bean was having her nap I had floor-time with Beanie Boy on his various mats.  He’s really starting to enjoy tummy time and is getting very strong at holding himself up.  He’s been trying for the last couple of weeks to roll over but not quite managing it and then today, HE DID IT!!  I took this photo immediately as he had rolled over, just look at how pleased he is with himself!  A little while later when I popped out of the lounge to get a drink I found him on his tummy again, my clever little boy – this is the start of all hell breaking loose I just know it, once they start moving they don’t stop.  Oh well, no rest for the wicked – as the saying goes!