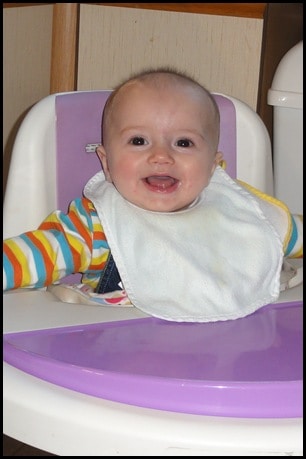 I can’t believe my baby is in a high chair already! Today really brought it home to me just how much and how quickly Beanie Boy has grown.  I was able to visit a friend today who gave birth to her little boy on Sunday and he was the same birth weight as Beanie Boy.  It was so hard to believe that just over 4 months ago my little man was that size and now he is already sitting up in a high chair – you have to make the most of every minute of your children because they grow so fast.  I want to soak up every moment of my babies’ childhoods.

On a separate note, when I collected Little Bean from Little School today her key worker told me that they had given her chunks of pear and apple at snack time today and she cleared her plate! I actually jumped up and down a little I was so excited, this is another really big step for my little fussy eater.  They said that she had some last week too but had forgotten to tell me.  As I was walking back from school with her, I said to her “so I hear you had pear and apple for snack time” and she said “no I don’t like pear and apple, I just had the raisins” – oh well I guess I’ll have to play it dumb for a little while.